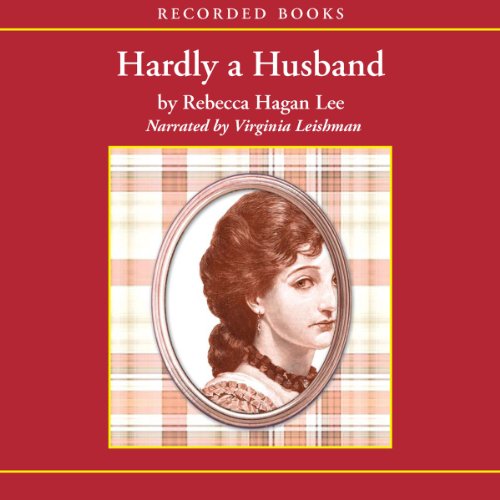 To ensure the quality of our reviews, please listen to this title before writing a review.

National best-selling author Rebecca Hagan Lee pushes another stubborn bachelor of the Free Fellows League toward the altar in Hardly a Husband. And obstinate Marquess Jarrod Shepherdston is not about to take the plunge without protest.

In 1820s England, Sarah Eckersley, the daughter of the late rector in Bedsforshire, has lost her father, been forced to move from her home, and is doggedly pursued by the loathsome Lord Dunbridge. Her only course of action is to become a renowned courtesan. And Jarrod Shepherdston is just the man to become Sarah's first lover. For Jarrod, who's taken great pains to avoid marriage his entire life, the offer is quite tempting. But Sarah's plot works so well that Jarrod begins to wonder just what he could be missing.

"Another superbly sexy treat that is perfect for readers who like their love stories leavened with a lavish dash of wit and a discreet hint of intrigue." ( Booklist)

I loved all 3 books in this series. All 3 men were a handful but really romantic with the right lady to bring out their true character. The narrator is a little weird constantly making sucking noises but you get used to it (beleive it or not) and it shouldn't sway you from the listen. The voices are great and identifiable threw out the novels. The cover and excert about the book are not enticing as they should be. I am hoping that there are more coming from the Free Fellows League (in audio) since more men joined the league through-out the series and the 3rd was a kind of cliff hanger. The men in the league (formed when they were children) are all very different but have stuck together as friends over the years and are always there for one another. Ms. Lee did a great job with the keeping of the times and you will enjoy a "More Grandious but somehow simpilar" time in our history. The steamy scences are very nice.

Would you try another book from Rebecca Hagan Lee and/or Virginia Leishman?

I am not sure if I would try another book. This one started great, and the secondary characters were wonderful, but the heroine was the major disappointment.

Would you recommend Hardly a Husband to your friends? Why or why not?

No, I think this is the worse kind of book. It portrays women in such a bad light. The heroine kept throwing herself at the hero. I got so embarrassed that she would not back off I had to stop listening.
He said he wants to chase a woman, her aunt says she should let the hero chase her. Even common sense would tell a thinking person that to keep pushing herself on a resistant man may not be the best idea, but the heroine just keeps going along her stupid path. I just thought why would any man want a whore for a wife, but since they will get together in the end, I guess this hero does!

The narration was not bad. from some of the reviews, I expected it would be worse, but it was good.

No. I especially would not want any young girl to see a movie like this. It shows that acting like a whore/courtesan will win you a man. Today's society is too full of that kind of thinking that makes women believe that they don't have value . This story would not be a good example.

I really hoped that the heroine would listen to her aunt ( I saw her in my mind as Judy Dench). The aunt was wise and had a really great plan to win the hero, but the heroine kep going against that great advice. Not sure why, as it was a great plan.
I really lovedHarriet//Robert. Their love lasted over 20 years of being apart....now that's real love and respect. It makes the h/h pale in comparison. Especially when the aunt carries herself with such dignity and confidence, at the same time her niece is trying to get "lessons" in how to be a good courtesan and seduce a man. The heroine seems so childish and immature . I wish the story was about Harriet & Robert instead.

Would you consider the audio edition of Hardly a Husband to be better than the print version?

I don't know I haven't read the print version yet

Aunt Etta Lady Dunbridge, she never gave up on love an got it after waiting 20 years.

What does Virginia Leishman bring to the story that you wouldn’t experience if you just read the book?

She a good narrator

Hardly a Husband is a sweet Historical Romance between the last Unwed Original Member of The Free Fellows League. Jarrod the 5th Marquis of Sherpherdston and the leader of the Free Fellows has vowed never to marry and if by chance he has too marry he has vowed never to love his wife. This is one of the rules of The Free Fellows League. The original 3 memebers Griffin, Colin and Jarrod were 9 and 10 yrs old when they formed there League and sign the charter in there blood. Now they are all grown up and Jarrod is the last to wed of the original 3 remembers. Jarrod parents are dead an die in a horrible murder/suicide that he witness. As a young boy he was followed around by the rectors daughter Sarah Eckersley age 5. Sarah has vowed to one day marry Jays as she calls him.

When Sarah's father suddenly dies she is left alone with her Aunt Etta and they are literally and physically thrown out of there parish home by the new rector.

Sarah and her aunt move to London were she appeals to Jarrod to seduce her and teach her to be a courtesan. Jarrod/Jays does all he can to keep Sarah from going through with her threat short of taken her virginity. As they relationship continues to grow Jarrod does realize that he love her and does the right thing and marries her. But there is a lot that happens before this. I really loved the part of Sarah's Aunt Etta after 20 years marring the love of her life Lord Rob Mayhew who is also, Jarrod's uncle and Godfather. This was a lovely secondary side story.
I Highly Recommend Hardly a Husband!!

Narrator IS Sucking on candy or something

I couldn't finish. I suspect the story would have been good, but I couldn't tolerate the sucking sounds the narrator makes while reading. She has a good voice. I don't know if there was poor editing or what. I strongly suggest you don't waste your credit.

Totally enjoyable, thoroughly sexy, completely entertaining and hardly a book you'll want to miss. Especially if a regency romance in all it's glorious facets is your kind of tale.

Narrator: Very well performed!!!! But PLEASE listen to the snippet before committing. I found her quite good indeed in this performance yet two books back in this series I couldn't make it to the 4 minute mark before having to turn it off. That first book, Barely a Bride, was one of the worst recordings ever made. And on top of the bad quality was the horrible mouthy sounds, swallowing, sucking, rolling and wet smacking sounds. As if the narrator had something in her mouth making it water and clack against her teeth. Well thankfully THIS recording is well done and the performance borders on the excellent. She seems to have improved with experience.

Heat Factor: HOT stuff indeed, yet only when the story supports it.

Creditworthy? Yes, in my opinion definitely.