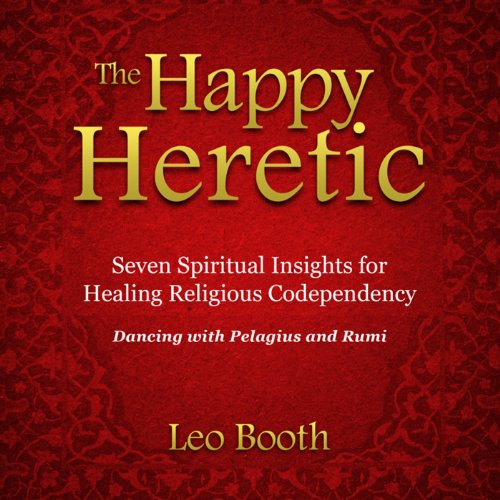 By: Leo Booth
Narrated by: Craig Jessen
Free with a 30-day trial

Religion can be source of comfort when facing struggles both personal and universal. But clinging to religion as a codependent fix for all problems can cultivate excessive fear, shame, guilt, and low self-esteem. Acclaimed author Reverend Leo Booth, a Unity minister and former Episcopal priest, warns that a belief in tenets like "Everything happens for a reason" and "This is in God's hands" can be the first step in developing religious codependency. Rev. Leo turns traditional thinking and spirituality upside down by suggesting that many toxic messages emanate from core religious beliefs. In The Happy Heretic, he challenges beliefs like original sin; a dogmatic, one-way path to God; the shaming of human sexuality, religious codependency; and the exclusiveness of Jesus' perfection within the human race. The arguments he presents are derived from Pelagius, a fourth-century monk who challenged the teachings of St. Augustine; and Rumi, a revolutionary 13-century poet and philosopher. In his confessions, St. Augustine's states, "It is only by Your grace and mercy that You have melted away the ice of my evil."

Pelagius felt this idea lacked balance. It affirmed only God's role and didn't speak to our involvement. Likewise, Rumi believed that God's spirit exists within all human beings and enables divine creativity in life. The theology, philosophy, and recited prayers we learned through organized religion often emphasize the idea that we are sinful people who are dependent upon a powerful and punishing God. The Happy Heretic provides an escape from this shadow by encouraging listeners to enter into a partnership with God, affirming personal dignity alongside responsibility; in other words, "free will" and the choices we make determine much of the success or failure we encounter. Real-life examples of the core issues surrounding religious codependency, along with Seven Spiritual Insights, help listeners rethink their religious beliefs - including the prayers they grew up with - to form a deeper, more spiritual understanding of who they are and their connection with God.

In this thought-provoking listen, Reverend Leo calls himself a heretic, a person who is willing to think differently, and he invites listeners to discover an alternative explanation for how we experience God's grace. The Happy Heretic explains this divine relationship in ways that make us feel alive, empowered, and still true to who we are. The Happy Heretic confronts toxic religious messages and brings a spiritual awareness that affirms human possibility and responsibility.

What listeners say about Happy Heretic

Booth offers a refreshing new perspective to challenge old religious programming. Allowed me to reconsider my relationship with religion, God and spirituality. Will be listening again and again.