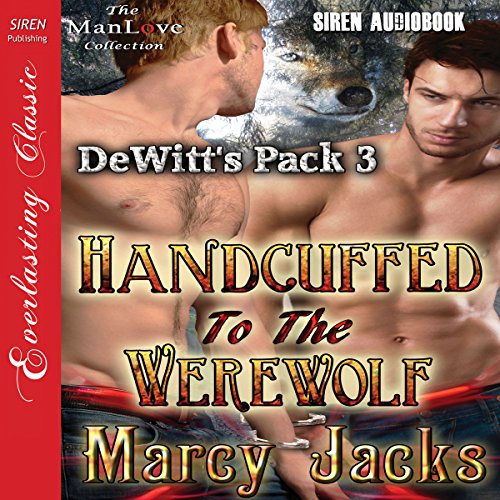 Handcuffed to the Werewolf

Jason Snowe woke up in a nightmare. Kidnapped and thrown into a cement hole, he is chained to a werewolf, and is to be used for food when the wolf becomes too hungry to go without! Mick Stewart despises the fact that he was caught by a bunch of lowbrow hunters, but there is always a silver lining. The human they chained him to is his mate, and though Jason is wary of him, they both agree that working together is their only chance of escape. For Mick, traveling whilst chained to a human only slows him down, and though Jason tries to keep the silver in the chain from affecting him, he soon comes down with a case of silver poisoning. For Jason, finding out that he has a mate is surreal enough, but now he is faced with the possibility of losing Mick to the hunters before they even have the chance to really know each other.

What listeners say about Handcuffed to the Werewolf

This is the 3rd installment in the Dewitt pack series. As I have said in previous reviews, I grade Siren books on a 1 - 3 scale b/c they are very basic, formulaic stories that follow a set pattern. However, some storylines and characters are better than others and I am enjoying this particular soap opera. You really have to suspend belief with Siren books and just listen to the story as a fairytale and not have any expectations of realism. It has lots of mm sex, instalove, mate in danger, must save mate, HEA. That is the story, don't expect more. Now the narrator for this series is a whole other matter. He is fantastic and really makes the listen more enjoyable than reading the book.