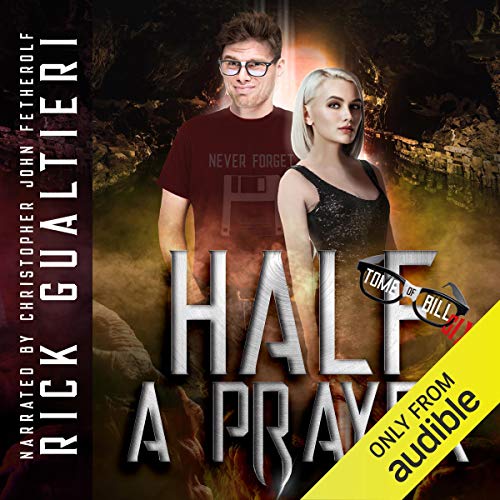 By: Rick Gualtieri
Narrated by: Christopher John Fetherolf
Try for $0.00

Terror lurks below and it's about to surface.

The end of the world is rapidly approaching, but Bill Ryder - gamer, geek, and legendary vampire - finds himself with more pressing concerns to worry about: the women in his life. Sidelined from action, he's forced to reevaluate his feelings. Sadly for him, it's a luxury he can ill afford.

An unstoppable terror from the dawn of time has awoken deep beneath the Earth and is headed his way. To make matters worse, he's been deemed a traitor by those he thought to be his allies. Now he finds himself fighting off enemies from all sides while warring with his emotions. Talk about sucky timing for introspection.

As the world crumbles to pieces around him, Bill must muster his courage, master his powers, and rise to the destiny he's been trying so long to deny - because if he doesn't, his love life will be the least of his worries.

What listeners say about Half a Prayer

Another fun outing for Bill and friends

If you liked the previous books you will like this one too. In fact, I will say this book was much better than the previous one. This story advances the meta-plot without making it feel incomplete like the last novel did. There are still a lot of loose ends to be dealt with at the end of this one, but you don't feel like you are left hanging.

The characters haven't changed much, and unlike some of the complainers I prefer it that way. The characters have matured a bit but have not lost the charm that made them interesting in the first place. When a lot of people say grow they really mean dark, emo or angry. Bill is maturing but keeps the bright outlook that makes this series work. Change that element and the story won't work as far as I am concerned.

The book is much longer than previous ones and that's a good thing. Despite the change in length the story keeps the same fast pace of the smaller books in the series. This one is definitely worth a listen and I look forward to more books from the author.

The team does it yet again! With all due respect to Rick's writing, CJF *IS* Bill - I can't imagine any other narrator. I love the characters - I cheer or boo each time one puts in an appearance. Am I the only one with a kinda perv-o-crush on Gan? I actually did a little happy-dance when she showed up in this one.

As I implied, the characters are well-written by Rick and wonderfully performed by Christopher. The pacing is great, in both the individual novels and the series as a whole. The big action scenes are artfully drawn, and the banter, as always, is spot on.

I keep telling my wife: "THAT'S the way programmers talk! It's not my fault!"

I also like Rick's take on the "secret vampire empire", and the audacity of making "Yeshua" on of the founders.

It's what they used to call a "ripping good yarn!"

The plot thickens. The several plot lines are weaving together towards an exciting conclusion .

Love the series, really can't get over how I have related with the characters so completely. who would have thought it. One negative thou, it's like being carpet bombed with f-bombs. I m no prude. but damn.

loved em all so far. ease keep em rolling out. they rock sir. thank you

I like the story and will read on for more. however, there's too much cursing and way too much use of the word thus. They annoy me enough to mention it.

Shining Fury is the book to read after the next book 7 then onto book 8. There are two books in this series that are not numbered. Another great book for the series was not dissapointed. Good audio

I enjoyed all the previous books, but this one was way too long and got boring. I couldn't wait for it to be over after only a few hours. I probably won't continue to the next at least not for a long while.

I've really enjoyed the Bill the Vampire series. It's kept me engaged. It has geek and nerd humors. Sure it is a bit over the top, but come on. Have you read the others? If you like paranormal, gamer geek and humor you should like these. I look forward to the next one.

Bill just gets better and better...

These books are a guilty pleasure. Live the snark and the geekiness. Can totally envision several of my IT friends as Bill and his crew. Keep these books coming Rick!

Though the narrator can't pronounce saiyan correctly still a great addition to the tome of Bill I will definitely be getting the rest of the series ASAP!