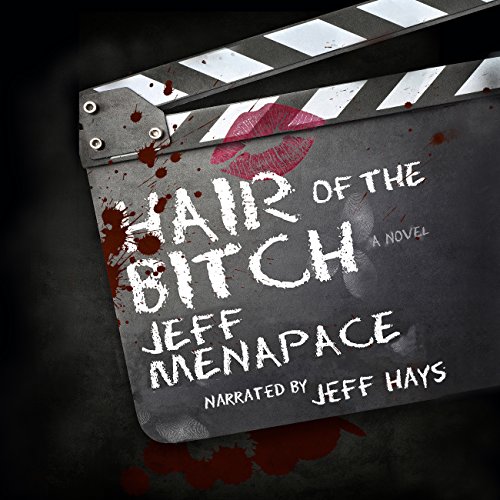 Hair of the Bitch

By: Jeff Menapace
Narrated by: Jeff Hays
Try for $0.00

From Jeff Menapace, best-selling author of the Bad Games trilogy, comes Hair of the Bitch, a disturbing psychological thriller with tongue firmly planted in cheek...until it's ripped out.

Calvin Court is a massage therapist with a few secrets. He battles depression. He medicates with too much booze. And he's got the hots for one of his clients. She claims the feeling is mutual...until she frames Calvin for murder and blackmails him.

The price? Not much. Calvin just has to do her bidding in a black-market industry catering to the very rich and the oh-so-very disturbed.

Maybe he's just better off at the bar.

Jeff Menapace is the winner of the 2011 Red Adept Reviews Indie Award for horror.

"One of the Best Novels of 2014." (John Dixon, best-selling author of Phoenix Island)
"I find the author to be ridiculously talented." (MichelleR, Red Adept Reviews)

What listeners say about Hair of the Bitch

READ (LISTEN) TO THIS BOOK!!

What did you love best about Hair of the Bitch?

I loved that you literally were inside Calvin's head. He was constantly arguing with himself about choices he should or shouldn't make and I loved how you got to see how tortured he was. The ending was insane and I can't believe I didn't see it coming!

I can't say there was one thing in particular I liked about the story, as I liked the whole thing. The characters were awesome, especially Calvin. Angela got on my nerves a couple of times but the book wouldn't have been as good without her.

Have you listened to any of Jeff Hays’s other performances before? How does this one compare?

I've never listened to any of Jeff Hay's performances before.

Absolutely! I needed to know how Calvin was going to justify his actions and what consequences would result from those actions.

What made the experience of listening to Hair of the Bitch the most enjoyable?

Great story line, enhanced by an amazing narrator. loved the "voice" he gave to each character, along with the sound effects used.

It was a dark and twisted tale. I liked the characters, even if they were all messed up in their own way.

What does Jeff Hays bring to the story that you wouldn’t experience if you just read the book?

Jeff may it feel like there was definite separation between each voice. I've listened to some audiobooks and couldn't tell who was "speaking" at times, not the case with this one.

This was an amazing book. Very sick and twisted - one of the darkest books i've read. I loved it!

What made the experience of listening to Hair of the Bitch the most enjoyable?

I don't know if I would classify this experience as enjoyable. I thought the writing was excellent and the narration was certainly top notch. But this was a book that I found was more akin to watching a horrific car crash. You don't want to watch (or listen in this case) but you cant' stop because something deep inside you needs to find out what happens and if you're going to see any blood. You know it's not something that "normal" people do but there's just something that is drawing you in.

The dark humour that showed up at times was quite unexpected and in one part where the main character is having a conversation with his own inner conscience I actually laughed outloud.

I don't know if I actually had a favorite character from this book. Pete (the best friend) was the character I could most identify with, but due to the nature of the book I found most of the characters to be fascinating, horrific, and repellent. Although I do have to admit the main character Calvin did have his moments of "heroics".

Which character – as performed by Jeff Hays – was your favorite?

All of Jeff's characters were strongly performed and each of them had subtle things about them that I loved. I especially liked when Angela was disciplined by her boss from Calvin's failure and the lisp that Jeff introduced into her voice from that point on.

During some of the scenes in the book I was left somewhat unsettled because of the descriptions. I think if I had been reading the book it might not have been as bad, but with someone describing the scene it altered the way my mind saw the scene.

I was both bitter and satisfied with the ending of the book and I don't think I would have enjoyed it as much as if it had ended happily for everyone involved.

The author did an excellent job writing the story. It made me thoughtful as to if someone could really do this and then actually made me question if I could do something like what Calvin was involved in. Definately an unsettling story, but if you enjoy reading books about the darker side of the human psyche, or want to be unsettled I would recommend this book for you.

In need of serious need of therapy

This is a messed up book sick twisted and perverted like the movie 9mm except way worse.it has a way of repelling you through the main character's sick and twisted moral compass and then redeeming his humanity in a f'ed up way. All and all this was a good book but man it can frazzel your nerves with depravity.

What other book might you compare Hair of the Bitch to and why?

None this book is in a world all on its own

Which character – as performed by Jeff Hays – was your favorite?

First let me establish what Hair of the Bitch is not: It is not an uplifting tale of the human spirit. It is not a PG-13 take on the murder mystery. It is not for the faint-hearted or weak-stomached. It is not high prose, an homage to the English language …

The good news? Clearly Jeff Menapace does not try, or want, it to be any of these things. Instead the narrative is spare and more than a little jagged -- sometimes downright ugly -- like a typical "blockbuster" movie script, except with more words, and not always the best chosen ones. And yet! And yet this style is perfectly suited to the gritty, nasty and utterly obscene subject matter of the novel.

The narrator, Jeff Hays, is fantastic as Calvin, the "Joe Six Pack" protagonist who's one bad decision after another gets him into deep doo-doo before you know it. He's also great as Angela, the enigmatic faux-heroine beauty who leads Calvin down the garden path, so to speak. Surely he did something in post-production because the voice is very convincingly female.

So I am giving this an overall 4-star rating, the caveat being that I tend to judge works in their own league. In other words, I'm not going to compare Hair of the Bitch to Steinbeck or Hemingway, but to others in its class … that said, I did have some problems with this book, namely that the aforementioned Joe Six Pack, Calvin, is really not all that likable at the end of the day. Which is a problem, because if he died at the end (spoiler alert, he doesn't!), I would have been like, "Oh well." Nor is Angela all that likable either. The difference is that we are exposed to all of Calvin's many flaws, which make him a sympathetic character at least, if not downright pitiable. And there was enough action and impending danger to keep things interesting.

In the final analysis, this was a fun listen and nothing more. And 6 1/2 hours of solid entertainment is nothing to sneeze at. So certainly know what you're getting yourself into here, but if that doesn't bother you then give this one a try.

Good Thriller with some OMG moments

Good overall book, I would not expect anything less coming from Jeff Menapace. It keeps you intrigued from the beginning all the way through the end. If you enjoyed Jeff Menapace's other books this is one to definently listen too. The narrator does a fantastic job through out the book.

SO TWISTED it never really ends.

Yes, but only if they enjoyed this level of entertainment.

What was one of the most memorable moments of Hair of the Bitch?

Too many to cover without giving things away.

Have you listened to any of Jeff Hays’s other performances before? How does this one compare?

Jeff Hay's was new to me, but I will notice in my future choices. Good Range.

SOOO many scenarios, some very intense > but again, I can not really say. Read it yourself.

A quick moving story that will keep you guessing, at least it did me.
I never did truly figure it out.
I am interested in reading more from J. Manapace.

This was a quick listen. I actually enjoyed the crassness of the book and all its horrifying crudeness lol. I would recommend this to anyone who thinks they are have a bad week lol

Would you listen to Hair of the Bitch again? Why?

LOL Once is enough

He has an easy to listen to voice, that doesn't take away from the action of the book. His character voices are well done

I listen to and from work

The darkness reminded me a bit of the Hannibal TV show that I love, would love to see more books along this line

Unpleasant characters leave a bad taste in my mouth...

I have really enjoyed everything of Jeff Menapace’s that I have listened to previously, but this one just was not that great.

The characters were almost universally horrible, with few redeeming qualities. The victims and what happened to them just made me feel bad. The ending really sucked. The whole book just left a bad taste in my mouth.

The final showdown scene was pretty good but that wasn’t enough to make up for the rest of the book.

I recommend Wildlife and Wildlife Reckoning instead of this. They were violent but also a lot of fun.