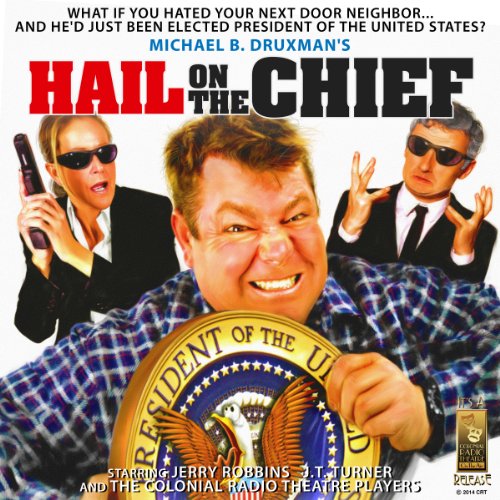 Hail on the Chief!

A Comedy in Three Acts
By: Michael B. Druxman
Narrated by: Jerry Robbins, J.T. Turner, the Colonial Radio Players
Length: 1 hr and 4 mins
Categories: Fiction, Humor
4.5 out of 5 stars 4.6 (11 ratings)

Hail on the Chief!

What if you hated your next door neighbor...and he'd just been elected President of the United States?

In Michael B. Druxman's outrageous comedy, HAIL ON THE CHIEF!, cantankerous gentleman rancher Oliver Pettridge hates his neighbor, a former cowboy movie star. He's hated him for years over a property line dispute. As the play begins, the neighbor has just been elected President of the United States. Now, Oliver must deal with all the inconveniences that anyone living next to the President must endure...including a paranoid Secret Service Agent. After the agent "bugs" Oliver's house, Pettridge decides to declare "war" on the Secret Service.

From the award winning Colonial Radio Theatre on the Air.

Would you listen to Hail on the Chief! again? Why?

I bought this sometime in April last year and I have listened to it more times than I can count from memory alone and will listen to it many many times more in the future. .

I loved the interaction between the characters. It truly felt natural even though the situations themselves would never happen for various reasons. It was still very much based in the real world.

Perfect performances for the characters being played.

I would love for them to make this into a series in some way by at least using the same characters and cast. There really are so many possibilities with the great majority of the cast and things that could pop up. This is a true favorite.