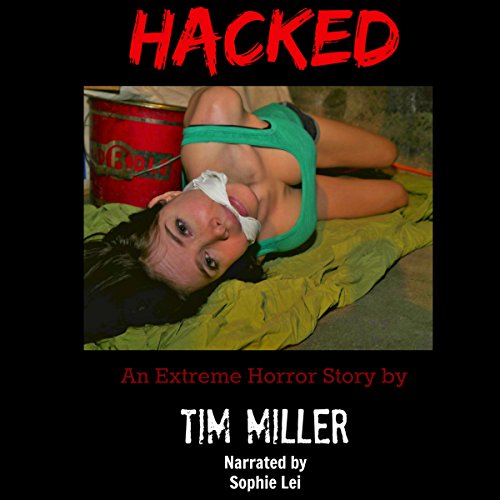 Rodney thinks he is a true ladies' man on the Internet. He is also a sociopath. He spends his days talking to women on social media and wooing them with his Internet prowess. Except most women are not impressed.

When he meets Abby on a site, he decides immediately that she is the one for him. Abby, however, doesn't see it that way. When she kindly turns him down, Rodney takes matters into his own hands. He kidnaps Abby to teach her the consequences of refusing his advances.

Over the next 24 hours, Abby learns a new definition of pain and suffering. Using conventional tools as well as some homemade devices, Rodney will stop at nothing to get his point across.

What will Abby do to keep from becoming Hacked?

What listeners say about Hacked

This is a well written and gory little story. My only real issue with it is it feels very thin, two characters in particular just feel like they were added to pad the story out because there weren't enough bodies to hack. This reminded me a lot of hostel, a film that I enjoy. I would level the same criticism at both of them though, that neither seems to have much to say. Both are content to wallow in man's awfulness to each other and also just revel in red goop. But its still a fun ride, and ultimately a satisfying one.

Over the top horror grossness

The reading is amateur but the content is horror to the extreme. Lots of fun on a dark road drive.

be kind to creepers

Would you listen to Hacked again? Why?

What was one of the most memorable moments of Hacked?

To many to count but hearing Rodney having his colon removed and his facial features his nose being removed was pretty good I would have done more but it was pretty twisted: I enjoyed seeing him get some of what he dished out returned to him I wish his torture could have been a lot more lol

I enjoyed her narration

Who was the most memorable character of Hacked and why?

Rodney most definitely made me realize I tend to get aggressive towards a lot of creepers and I will never ever engage in another conversation I will simply ignore them I enjoy my body parts and DON'T want them hacked!!!!

Thanks Tim Miller for teaching me a valuable lesson don't interact with weirdos/creepers online it can lead to horrific consequences!!!!

It should be clear that you need to enjoy, or at least enjoy being grossed out by, descriptions of torture, rape, murder and necrophilia of you're going to take the Tim Miller route. That makes up the bulk of, I think, every one of his stories. He succeeds, without a doubt, in making a reader gleefully disgusted at points, but it's also, and more predominantly so, dreadfully dull stuff when you're not given a reason to care about anyone. Every single character is just fodder, and it can make getting to the end a chore.

However, the last act is where Miller shines. He gets bored with the torture, escapes are made and suddenly all of these characters begin ping-ponging off each other, and even though you don't care who dies it becomes far more interesting because it's no longer about torture, but about finding out who kills who and who gets away and how.

The audio quality and narration in this is appalling. Truly. The narrator CLEARLY lost a bet, because she hates this book. Her performance is a mixture of boredom and apathy. The production in the first hour is equally horrible. Audio dips in and out, is tinny as if recorded in a bathroom, and, for my fellow long-haulers, is IMPOSSIBLE to hear while driving. The quality does get better, but even then mistakes made during recording are just left there! And this is on Audible.

I recommend Tim Miller to gorehounds and Lee fans, I really do. But not this one in its current state.

No. Absolutely. Just. No.

Doesn't have a redeeming quality that said about this story. Don't even waste your time or money.