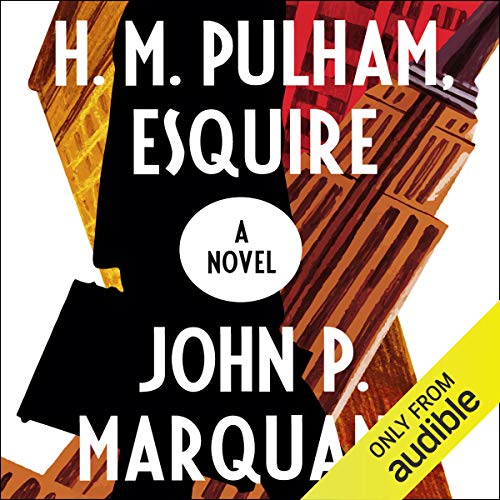 A Harvard reunion prompts a Boston Brahmin’s search for meaning in this comedy of manners by the number-one New York Times best-selling author of Point of No Return.

In preparation for the 25th reunion of his class at Harvard, Harry Pulham is asked to collect and edit the personal histories of his fellow alumni. A glance at the previous year’s class book tells him just how tedious the assignment will be: “I have been very busy all this time practising corporation law and trying to raise a family”, a typical entry reads. “I still like to go to the football games and cheer for Harvard.”

Harry’s autobiography is almost indistinguishable from those of his classmates. From his career at a Boston investment firm to his marriage to childhood friend Kay Motford, he has always made the safe, familiar choice - with one exception. For a brief interlude after World War I, Harry joined an advertising agency in Manhattan and fell in love with a beautiful, independent woman unlike anyone he had ever met. A wholly unexpected future opened up for him in those few months, but when family obligations called him back to New England, the relationship came to a sudden end. Now, 20 years later, Harry believes that his story could not have turned out any other way.

A clever satire that achieves heartbreaking poignancy, H. M. Pulham, Esquire is a masterpiece from the author declared by the New York Times to be “our foremost fictional chronicler of the well-born.”

Narrator has an uphill battle with so-so Marquand

Harry Pulham is essentially an early draft of Charles Gray, the central character of John P. Marquand's later, and best, novel, "Point of No Return." Though they are cut from the same cloth -- New England-born businessmen, scions of the middle class and upper-middle class and solid privilege -- in the first half of the 20th century, Gray is a more realized, and therefore believable, creation than Pulham. Their stories are much alike, men of middle age trying to figure out how they got where they are and wondering if it was worth it. The narration is good, but the reader must feel some sympathy for the narrator, for he is hobbled -- or seems to be -- by something that is not his fault: an authorial tic of Marquands's. Marquand appends each bit of dialogue with an attribution of the speaker -- "he said," "she said," "Bill said," "Kay said" -- even when it is perfectly clear who is speaking. This continual repetition, less noticeable in reading it, is annoying when read aloud. Other than that, the narrator does a fine job of fitting his voice to various characters and to the narration of descriptive text.