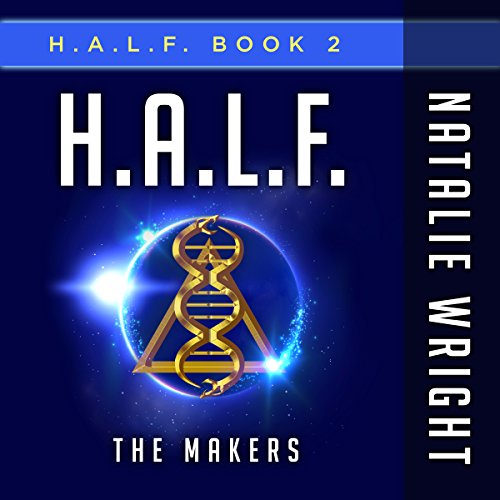 By: Natalie Wright
Narrated by: Dylan White
Try for $0.00

You've seen the aliens known as "the Greys" in movies and on TV. But what if everything you think you know about them is wrong?

And what if the Greys are only the beginning?

On a nondescript planet on the far side of the galaxy, the M'Uktah have evolved from a wolf-like predatory creature into a highly advanced species that has mastered intergalactic travel. They are cultured. Refined.

Erika Holt dodged death and departed Earth in an alien ship. It wasn't how she'd planned to spend her senior year. Is she on her way to paradise? Or to a hell worse than the underground lab she escaped?

The greys rescued Tex from A.H.D.N.A. and have promised him a life he could never have imagined. But what will he have to give up to become one with the Conexus?

Jack Wilson is still Commander Sturgis' prisoner but a promise of freedom comes from an unlikely source. Will his liberation cost more than he's willing to pay?

Commander Sturgis has the vindication she craved and the alien war she prepared for. But while she cleans up the mess the aliens left behind, The Makers have other plans for Sturgis and her prized creation, Alecto.

Caught up in their personal battles, will any of them realize the threat that looms over us all before it's too late?

What listeners say about H.A.L.F.

Read book 1 first but awesome (tho hard to follow)

I'm going to have to go back & read the first one. I'm loving it so far but I feel like I'm missing allot of the back story. It's written from the point of view of numerous people. I don't understand "the taking" so ..............it's definitely worth getting the first one to get up to speed! Love the narrator! given free for honest review

This Second Installment was excellent

Have you listened to any of Dylan White’s other performances before? How does this one compare?

Clear delivery. I was able to understand her pronunciation, and I enjoyed her style.

Dylan White shows us how it's done by his performance of Natalie Wright's book "H.A.L.F."

“This audiobook was given by the author, narrator, or publisher at no cost in exchange for an unbiased review."
The country experiences change , expressed thru characters I can relate to. The alien and time warps bring a sense of fantasy that is held in check by our believable characters. Overall one great series you can truly enjoy, I did.

book two is where its at!!

ok so I got the first book because I saw it was cheap and scfi which I love and after getting done with book I was like that's a good book but book two?! this is where the story really gets going! where we learn who each character really is! not to mention when things were not what they seemed ;) get these books and get the audio narration! its a great way to really get into the story! the narrator give everyone such character and brings the pages to life!!

This story goes in some directions I never saw coming. I love all of the characters and I’ve already started book 3. The war that is coming will be epic. The virus released is all too close to home with the corona virus going on in the country at this very moment.
Dylan did a great job narrating but I usually hate it when a narrator changes mid story. The sound quality was excellent but I found that I had to turn the volume up twice as loud as usual in my car and while listening on my phone using the speaker or headphones.

As Good As The First Book

This book was just as good as the first in the series. I would definitely recommend starting there if you are looking at this book. I don't think it would be quite the same without the backstory of the first book.

Narration and editing were both spot-on once again. 5 stars!

I requested and received a free copy of this audiobook from the author, publisher, or narrator in exchange for an unbiased review. I was NOT required to write a positive review and this reflects my honest opinion of the work.

You should listen to the first book in this series before listening to this one. There is a lot of context, character development, and history that builds up to this story.

This story begins right where Book 1 ended - some of the core characters have been swept away into an alien spaceship while some are evading capture and arrest by secret government agents.

Natalie Wright has created complex worlds with layers of technology, criminal enterprises, and science. This book steps up the action with elements of alien civilizations, complex relationships, and the ethical questions of genetic engineering. This story has a lot of layers, but it is also entertaining and moves quickly.

I have the same issue with the narrator as I did with book 1. His voice fades to a whisper and at points, it is difficult to hear. I had to adjust my volume constantly.

This Series is getting Better and Better

This is a great book and so far as me in love with the entire series concept fall in love with halfs almost from the start. The writer envelops you into the world of the HALFs and it is a story unlike others I have read. Great Premise and if you like SciFi with a little "magic" this book will scratch that itch. Start with Book 1 and then read this one you won't be disapointed

The story progresses for a good YA Scifi series.

First I want to thank Natalie Wright for providing me with a review copy of this book. If you liked book one then you will enjoy book 2. While I liked the narrator of the first book better, Dilan was a good reader. The story progresses nicely and it is a very good part 2. To be clear this is not a stand alone book and it should not be read unless you are planning on picking up the first and last books in the series as well, but it is well worth your time and credits. This story takes things in a different direction than I expected which always makes for a more interesting book. Throughout the series you continue to see how the choices that the character make change them and affect their future choices. Solid YA Scifi book.

H.A.L.F.: The Makers, book 2 in the H.A.L.F series, picks up right where the last book left off. Erica, Tex, and all the rest are back, and wow do they go on a wild ride. I must admit when I reached the end of book one, I sure didn't expect this second book to go the way it did. Aliens, more aliens, and time travel are just the tip of the iceberg for what you'll experience in this book. I try never to post spoilers, so I'll be rather vague, but I will with one notable exception I enjoyed the book quite a bit. The part I didn't? Ms. Wright introduces us to a new alien species and it's these chapters, only 3 if I recall correctly, which I didn't enjoy. What was wrong with them? Well to be honest, they just felt too alien. I know that sounds strange, but that's how I felt. There is no question Ms. Wright loved this race, that she put her heart and soul into these creatures. You can tell she'd worked out every facet of their society, and yet that was part of the problem. She'd clearly spent a huge amount of time world building, and it seemed like she wanted to share all that knowledge with her readers. As I said, these creatures are only in 3 chapters and yet in the ebook the writer had to included a 6-8 page appendix of glossary terms. These chapters are told from one of these creature's point of view, and the creature thinks and speaks with all these foreign words and concepts that that often entire sentences would sound like pure gibberish. I appreciate the time and dedication that Ms. Wright obviously put into this, but parts of these chapters came off like you were watching a foreign film with no subtitles. Also I didn't feel that these chapters actually added anything to the actual story that was the focal point of the book. interesting society? Yes. But was knowing all the nitty gritty details about the creatures and their society important to the story being told? No. I'd elaborate, but then I'd need to go in depth and put in a bunch of spoilers. Just my opinion, but it would have been a tighter story either without these chapters entirely. I think the author could have found a way to tell us the important aspects about these creatures without drowning us in the details of their society.

The book is narrated by Dylan White, and he is not the same narrator who performed the first book (Andrew Tell did the first book and I really enjoy his work), and I will say that it took me a little while to adjust. That being said Dylan does a fine job of bringing the characters and story to life and I would gladly listen to more of his work.

I received a copy of this audio title for free in exchange for an unbiased review.