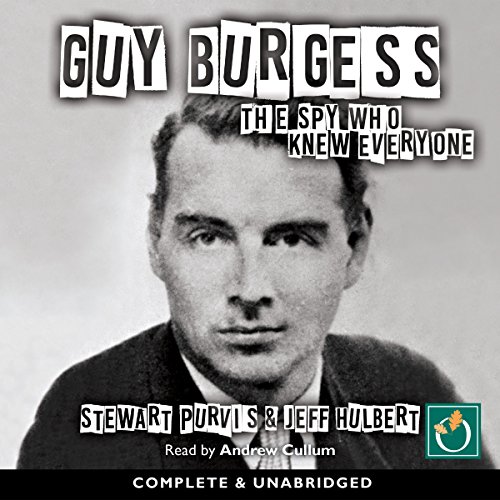 By: Stewart Purvis,Jeff Hulbert
Narrated by: Andrew Cullum
Try for $0.00

Cambridge spy Guy Burgess was a supreme networker. He also set a gold standard for conflicts of interest, working variously for the BBC, MI5, MI6, the War Office, the Ministry of Information and the KGB. Yet Burgess was never challenged by Britain's spy catchers: his superiors were convinced he was too much of a liability to have been recruited by Moscow.

Now, with a major new release of hundreds of files into the National Archives, Purvis and Hulbert reveal just how this charming establishment insider was able to fool everyone for so long, without suspicion, all the while working for the KGB.

"[An] excellent biography." ( Financial Times)
"Adds much to a familiar story thanks to newly released files.... [Stewart Purvis and Jeff Hulbert's] revelations leave us all the more astonished that such a smelly, scruffy, lying, gabby, promiscuous, drunken slob could penetrate the heart of the establishment without anyone apparently noticing that he was also a Soviet masterspy." ( The Observer)

What listeners say about Guy Burgess

Eye-opening on one of the most infamous spies

I would if they're into history.

Guy, due to the complex version of his life we get.

Which character – as performed by Andrew Cullum – was your favorite?

None that come to mind.

A must-have for any fans of books on the Cambridge Five.

Unfortunately, the narrator sounded less animated than the shipping report. I cannot quite tell without reading this book if the book is being robbed of its conjecture, insights and reflections or if it is the fault of this bland, really terrible, narrator. I usually spot a bad reader at the point when you can hear the sample. Sadly his voice sounded fine in those few moments what I could not know is that it remains the same throughout. I will have to buy the book in print since I have sneaking suspicion it is a well researched and possibly interesting book who knows - fire your narrator!

I am not too sure I kept falling asleep

Did Guy Burgess inspire you to do anything?

Very good shows how gaulable the British are

extremely detailed they missed the point that burgers being a homosexual, which was against the law was a motive for betraying his country, a way to get even.