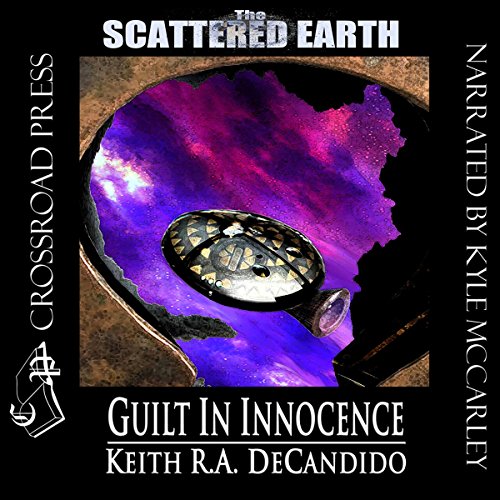 The Olodumare Hegemony rules the entire solar system. Led by Oba Isembi, the primary agents of his rule are the Ori-Inu: highly trained telepathic operatives, who do the Oba's dirty work. They are found and trained by Orisha.

When Ori-Inu start disappearing, Isembi sends his finest Orisha, Hembadoon, to investigate. But when he is injured in a refinery explosion, it's up to Folami-Isembi's best, most powerful Ori-Inu-to learn the truth about the missing operatives.

Folami uncovers a conspiracy to overthrow Isembi, encounters an old comrade whom she thought was dead, and awakens hidden memories that rock her very identity to its core!

A new tale of the Scattered Earth, and the first of many new adventures of the Olodumare Hegemony by international best-selling, award-winning author Keith R.A. DeCandido!

Guilt in Innocence is the third full-length novel in The Tales of the Scattered Earth, joining Aaron Rosenberg's Birth of the Dread Remora and David Niall Wilson's The Second Veil. Each author begins with their own world, their own culture, their own story...but there is something out there...something that will draw them altogether.

Once, long ago, there was one Earth. It was said that many deities gazed down upon it protectively, and there was balance between them all. Then something went wrong. The balance shifted-toward darkness. Earth was shattered, her people destroyed, her remains scattered far and wide. But the gods survived the cataclysm. They scattered as well, each pursuing a fragment of their former domain. And, when they overtook those shards, the gods drew upon what power remained to them to restore their worshippers to life.

These new followers rose from dust and imperfect memory, for the gods too had been injured. Each claimed a new home, and a new life, and each thought itself-at least at first-to be the only Earth. All memory of their former world was lost, except vague memories of the gods who gave them new life. Then, one day, a single great event drew all their eyes to the stars-and beyond. And each of them felt a yearning. Something in them desired to be whole again, or at least to understand.

These are their stories.

These are The Tales of the Scattered Earth.

What listeners say about Guilt in Innocence

Its a sci fi page turner that once you start you dont want to put down. alot of twists and turns leaves you always guessing whats next.