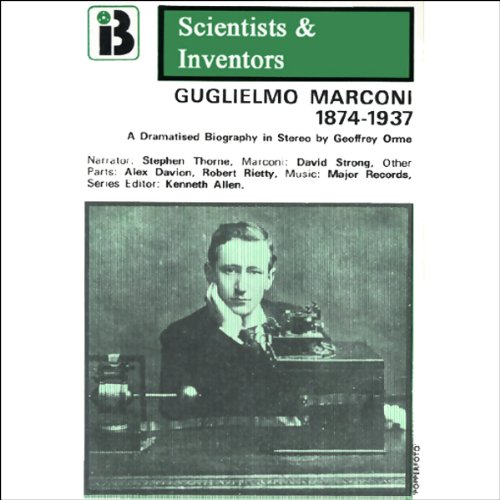 Marconi didn't invent radio waves, that credit goes to Heinrich Hertz, for whom the units hertz and megahertz are named. Hertz had discovered and first produced radio waves in 1888. But it was Marconi who took the Hertz discovery and developed what the world now knows as radio. In 1894 Marconi began experimenting at his family's home near Bologna. In 1899, he sent a signal 31 miles across the English Channel to France. Most scientists of the day were sure the curvature of the earth would prevent sending a signal much farther than 200 miles; so when, in 1901, Marconi was able to transmit his wireless signals across the Atlantic, the scientific establishment, and indeed, the whole world was stunned. And so began the revolution in communication that led not only to radio, but eventually to television and the mobile phone. In 1909, Marconi shared the Nobel Prize for Physics with his colleague Karl Ferdinand Brown.
©1976 Geoffrey Orme (P)1976 Ivan & Inge Berg

Interesting but missing a major fact

This book was interesting in telling about how marconi brought radio to the masses and mentions several scientist who helped in the endeavor. I found it to be rather interesting. It does however not mention that the inventor of radio was not marconi but nikola tesla. Marconi had his patent revoked because it was identical to a patent belonging to tesla. Unfortunately it was not uncommon for tesla to not get credit. He also invented the worlds AC power system, AC motors, X ray machine, florescent lights, tesla coil,wireless power distribution, particle beam accelerator, transformer and over 700 other things in nearly every electronic device we use today. In addition to this book I would recommend studio 360's book on tesla.