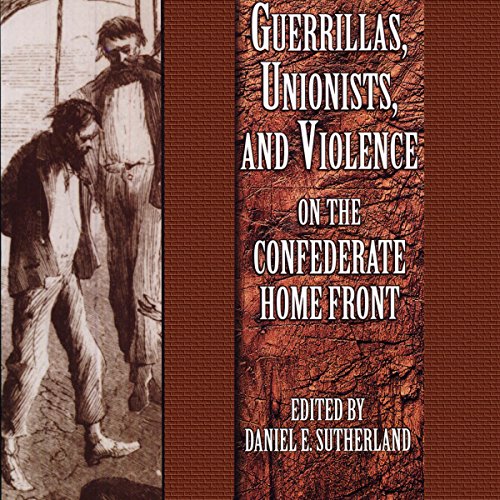 Guerrillas, Unionists, and Violence on the Confederate Home Front

By: Daniel E. Sutherland
Narrated by: Kevin Moriarty
Try for $0.00

Until recently, this localized violence was largely ignored, scholars focusing instead on large-scale operations of the war - the decisions and actions of generals and presidents. But as Daniel Sutherland reminds us, the impact of battles and elections cannot be properly understood without an examination of the struggle for survival on the home front, of lives lived in the atmosphere created by war. Sutherland gathers 11 essays by such noted Civil War scholars as Michael Fellman, Donald Frazier, Noel Fisher, and B. F. Cooling, each one exploring the Confederacy's internal war in a different state. All help to broaden our view of the complexity of war and to provide us with a clear picture of war's consequences, its impact on communities, homes, and families.

This strong collection of essays delves deeply into what Daniel Sutherland calls "the desperate side of war", enriching our understanding of a turbulent and divisive period in American history.

What listeners say about Guerrillas, Unionists, and Violence on the Confederate Home Front

This book examines how and why, violence and guerrilla warfare divided local communities in the American Civil War era.

What made the experience of listening to Guerrillas, Unionists, and Violence on the Confederate Home Front the most enjoyable?

Fascinating part of history of which I knew very little.

Moriarty's even tone and clear pronunciation.