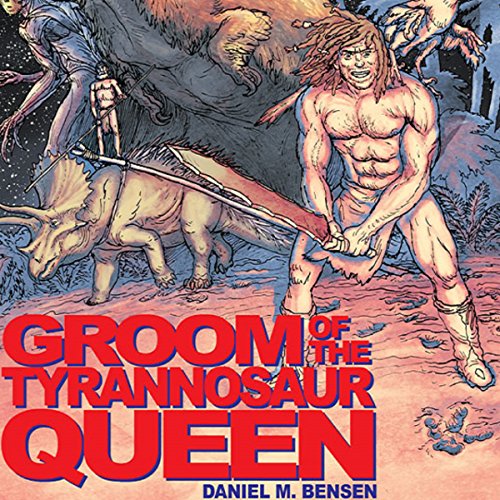 Groom of the Tyrannosaur Queen

A Time-Travel Romance
By: Daniel M Bensen
Narrated by: Eric Michael Stachura
Length: 14 hrs and 44 mins
Categories: Romance, Fantasy
4 out of 5 stars 3.9 (12 ratings)
This title is included in Audible Escape

Groom of the Tyrannosaur Queen

Former soldier Andrea Herrera isn't happy with where her life's taken her. Specifically, Hell Creek, Montana, 65 million years before the present. As far as careers go, making sure the dinosaurs don't eat her paleontologist clients comes in a pretty dismal second choice to serving her country. But when their time machine malfunctions, Andrea and her team are trapped in a timeline that shouldn't exist with something a hell of a lot more dangerous than terrible lizards: other humans.

Kidnapped by the stone-age descendants of a lost time colony, Andrea finds herself stripped of her technological advantages and forced into a war against the implacable armies of the Slaver Empire. Even worse, the Slavers have captured the time machine and the mission's one surviving paleontologist, using his futuristic weapons for their own ends.

Andrea's only hope lies with the ferociously intelligent and violently insane tribal war-leader, Trals Scarback. Armed with his mystic sword, his trained velociraptor, and his herd of war-triceratops, this former slave has the resources and motivation to take on the empire. But can Andrea persuade him to see her as a partner rather than a tool for his ambitions? Only if she beats the barbarian at his own game and becomes the Tyrannosaur Queen.

I was hooked by the title, and "Groom of the Tyrannosaur Queen" did not disappoint. It's not a super dense plot, but I liked that because I could keep coming back to it over the course of a few weeks whenever I did a long drive. The voices the reader chose to use were great, and since a lot of the storyline is based off of language barriers, he did a good job with choosing pronunciations and sticking to them.

Don't Judge This One By Its Cover

This book explores domination/subordination in a light-hearted way, there is some truly brilliant dialogue, and it also teaches you about dinosaurs. It's not your typical rah-rah-brah testosterone fueled sci-fi, despite the pulpy cover. There is enough action to oversaturate a Michael Bay film, and there are cavemen and sexy princesses and high tech powersuits and, yes, a tyrannosaurus rex on a rampage during a stormy battle scene. And time travel. But come on, those things are all necessary to the story. They really are!

You know an author's got amazing talent when they can tie all of those elements together into a coherent story that's satisfying and fun to read.

The narrator does a good job, but it took me a while to get used to his deadpan delivery. I like how he read the main characters' voices.

The story is riddled with logic holes. But who cares, logic is not the point. And there is little romance, dispite the subtitle. Instead there is loads violence and blow by blow descriptions of battles, way too much. It bogs down the plot but it is typical of this genre. Still if you are in the mood for escapist nonsense, here it is. The narrator does a good job with his campy bombastic delivery.