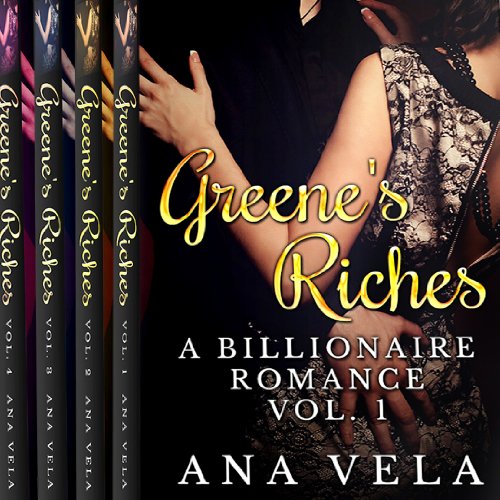 By: Ana Vela
Narrated by: Meghan Kelly
Free with a 30-day trial

The complete collection of the Greene's Riches series!

This boxed set includes all four volumes. Follow the Alexis Black on her adventures through:

Alexis Black is finally on her way to becoming a successful journalist - and moving to London!

After ending things with her boyfriend of over three years, she has finally decided to go travel like she has always wanted to and the magazine she works for is helping her pay for it by putting her to work.

Finding herself to be in the right place at the right time for so many events, she can see that her career will flourish on her trip, but will her love life?

After meeting Richard Greene, the Man of the Year, and finding that he has taken an interest in her, she wonders if she has finally found the electric love she's been looking for...or if she's just part of a rich man's games.

Now, Alexis and Richard are falling in love, until dangerous obstacles start popping up. From struggling with ex-boyfriends to dealing with extreme work commitments, the duo somehow grows closer and their relationship much stronger.

That is, until one dark secret is revealed - a secret that threatens to destroy everything that they have created together...

After falling in love in London, Alexis and Richard, one of the world's richest men, have reached a new stage in their relationship and have moved to start a new life in New York. But some things, and some people, never seem to change...

What listeners say about Greene's Riches

I enjoyed this story, author did a good job making a connection between characters and listener. I had to slow the narration down to 90% because it was to fast for me. New narrator to me and I think she did a good job. I'll look for more by her.

First of all I want to say that I appreciated the bundle. Had I listened to these books individually as they came out I would have been very upset because the cliffhanger after each book didn't leave me with "OMG I can't wait feeling" but a seriously, you're going to stop it there?" Meghan Kelly does a wonderful job narrating the entire series giving infliction to each character individually. In the beginning I like Richard Green's character but towards the third volume I began to feel like Alexis was being constantly manipulated and made me angry. In volume one: Alexis Black moves to England to start her travel journalist career to get away from her ex and meets the debonair and wealthy Mr Richard Greene. Richard is every bit the ladies man but is taken by Alexis' frankness. In volume two Richard and Alexis are starting to fall in love for one another. Richard is really aloof at times, but Alexis has a strong personality and stands up for herself. Then Alexis' ex comes to England and wants her back, but she wants nothing to do with him - Richard and Alexis grow closer after telling her ex to leave. In volume three Richard and Alexis up and move from England to New York. For me this situation didn't flow seamlessly but it worked. As they start their new life together in NY, I loved how Alexis challenges Richards desire to have a threesome with another woman and the question that anyone who start to ask about their life and stability of their relationship. In volume four - Alexis' ex comes back into the picture and kidnaps her - She doesn't know if she'll ever see Richard again or be able to tell him she's pregnant with their baby he never wanted.

Very enjoyable collection. Didnt like that it was broken down into parts but that did not matter much. Great narration