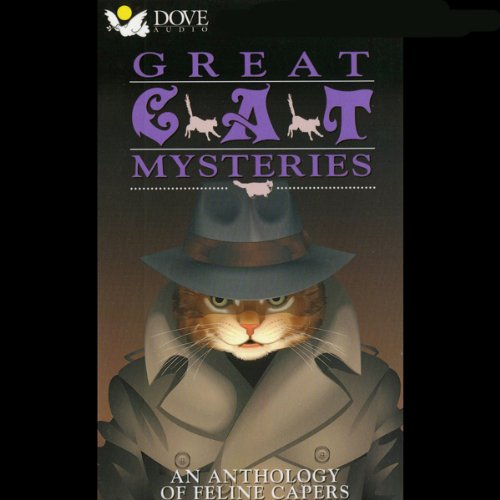 If you believe in the feline mystique, this anthology will have you purring. Intrigue, murder, and a not-so-cuddly kitty are at the center of these 9 stories by some of the finest, best selling mystery writers of all time. Curl up with Larry Segriff's No Hard Feelings read by Jamie Farr, Sharyn McCrumb's Nine Lives to Live read by Mary Jo Catlett, Joan Hess's The Maggody Files: Hillbilly Cat read by Jean Smart, Clark Howard's Animals read by David Birney, Edward D. Hoch's The Theft of the Mafia Cat read by Richard Gilliland, J.A. Jance's The Duel read by Eleanor Mondale, Ellery Queen's The Adventures of the Seven Black Cats read by Mike Walker, Janwillem van de Wetering's A Great Sight read by Mason Adams, and Carole Nelson Douglas's Coyote Peyote read by David Ackroyd.
©1992 by Joan Hess; 1992 by Larry Segriff; 1985 by Clark Howard; 1972 by Edward D. Hoch; 1991 by J.A. Jance; 1934 by Ellery Queen, Copyright Renewed; 1983 by Janwillem van de Wetering; 1992 by Sharyn McCrumb; 1994 by Carole Nelson Douglas (P)1996 by Dove Audio, Inc.

I have no complaints about the stories in this audible book. I enjoyed most of the readings. Especially Jean Smart. Unfortunately, the editing of the stories is awful; whoever edited the audible book did not allow for a break between each story. As soon as one story was finished another one began. I found this very frustrating. There was no time to evaluate each story. I enjoy being given the opportunity to create an opinion on the nature, character, or quality of the books I am listening to.

These are great stories, but there is less than a second between them! The name and author of the next story is not even given. The last sentence of one literally runs into the first sentence of the next which is very confusing.

Cat lovers may wish to avoid

Because of the authors included in this book, particularly Sharon McCrumb and Joan Hess, I was eager to listen. And several of the stories did not let me down. However, for anyone who has cats in their family, as I do, may wish to avoid this book. At least three of the stories involved death of cats and one deals with the theft of cats and their ultimate sale to vivisection/cosmetic laboratories with such detailed descriptions I couldn't listen to much of the story. Having skipped ahead, I did find a redeeming ending to the story, however sad, but this selection and others certainly cooled me to the book overall.

How old is this recording?

Terrible audio quality, such bad (or no) editing that there's no break between stories. Stories are great, but virtually unlistenable.

Each story in this collection, for the most part, is a lot of fun and what one would want in a cat-centric mystery compilation. There were two not to my liking but I can't tell you which due to the bizarre editing choice for the collection.

There is no introduction given for any of the stories, not even the name of the story or the author who wrote it. Stories simply run one into the next, and if it wasn't for different readers taking over, it would take you a few minutes to realize you were on a new story.

I heard several stories I'd love to read more like. I just don't know what I listened to.