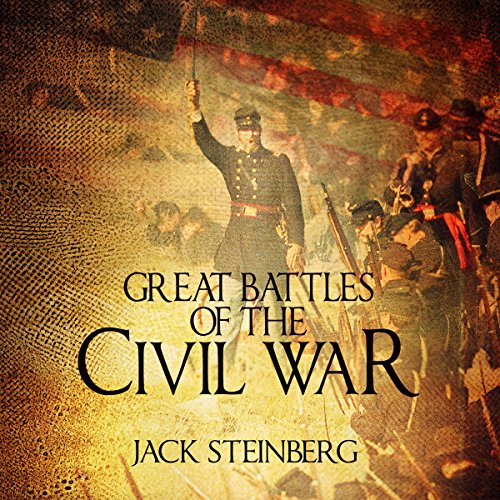 Great Battles of the Civil War

By: Jack Steinberg
Narrated by: Jim Johnston
Try for $0.00

How could a civil war come to pass only 85 years after the forming of a wickedly hard-sought-after unified nation? What could be so irresolvable that the people of that nation decided to tear it apart and go to war, rather than do everything possible to fix the problem? Ironically, the problem was that individual states wanted the freedom to govern themselves, which is precisely what said nation went to war over 85 years previously: the right of American colonies to rule themselves, instead of being subject to England.

The United States fought a long, bitter, deadly war from 1861-1865 over secession, states' right to govern themselves, and the right to keep a way of life based on slavery. Great Battles of the Civil War is the story of that war, of its most shocking and violent battles: Bull Run, Shiloh, Antietam, Vicksburg, Gettysburg, Fredericksburg, Chancellorsville, Atlanta, Petersburg, and Sherman's March to the Sea. It is the story of the deaths of 620,000 men, catastrophe that 9/11 didn't begin to touch, and great leaders like Robert E. Lee, Ulysses S. Grant, Stonewall Jackson, Abraham Lincoln, Ambrose Burnside, and Pierre Gustave Toutant Beauregard.

This is the story of an easy, one-day war suitable for a picnic and waving the flag that turned into four long years of disillusionment, destruction, and surrender.

What listeners say about Great Battles of the Civil War