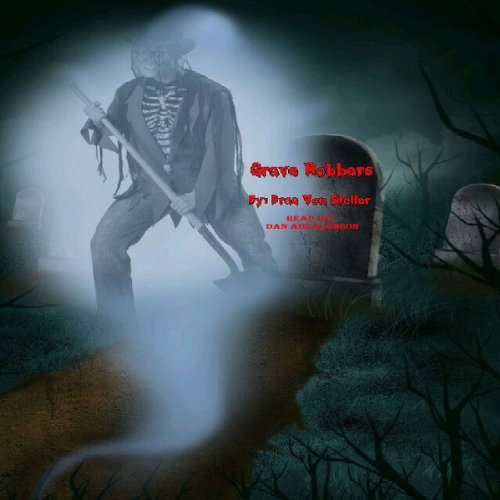 It was 1862 and the town of Sickville had many Gold Mines that thrived in an overabundance of wealth until greed took over and friends and neighbors became enemies. There was always someone standing guard by their mines, but there were too many people not in on the cut. So, that's when things got ugly and people that used to be friends started dying just to get their hands on the gold. The sound of gun fire could be heard on a daily basis, but many of the greedy townspeople that were killing to get in on a piece of the action had no mining skills so the town of Sickville went belly up in just a year.

The only place where business was thriving was the cemetery. A town that had a population of a thousand was now in the hundreds. Many of the survivors that survived the bloodshed left town out of fear of not knowing when their day was up to be buried in the cemetery that was quickly running out of space for their dead.

Would you try another book from Drac Von Stoller and/or Dan Absalonson?

I'd listen to more by Dan Absalonson, definitely - I might give Drac Von Stoller another chance - I do like short stories.

Would have been better fleshed out, IMO. I liked the way the narrator gave heft to the story with his vocal style.

"Grave Robbers" reminded me of old time radio theater for the modern age - sharp and absorbing from beginning to end. I love the seamless weaving of Drac Von Stoller's gritty, haunting prose coupled with Dan Absalonson's spot-on narration. The dark/moody music and accompanying sound effects add the perfect chilling touch to this top-notch production. This is a must have for all horror/suspense fans!

Grave Robbers is a very quick listen (or read) and is easy to follow. The writing is clear, but I have to admit, the style was not particularly resonant to me. There weren't any glaring issues with the style, mostly just little quirks that grated on my. For example, the author always called it "the town of Sickville". It was never just "Sickville" or "the town". Similarly, the interactions with an old man always described him as "the old man". Even the characters, when talking about him, always said, "the old man". It was never "him" or anything else. It got repetitive and, as a listener, pulled me out of the story.

As for the story itself, it felt incomplete. It took me a few minutes to figure out what had me slightly off-balance about the story, then it hit me: it wasn't really plot- or character-drived. This story is completely setting-driven. That in itself isn't bad, but I think it's not a short story. I didn't feel a ton of real tension, but I think the author was limiting himself with the length. I would read this story if it were expanded into a novella or novel. I do believe that this short story alone could be fleshed out into a truly intriguing work. But as a short story, it didn't work for me.

Would you be willing to try another book from Drac Von Stoller? Why or why not?

His tone was perfect and the voices were well done. I enjoyed the suspense that he portrayed.

There were parts that made me shudder toward the end.