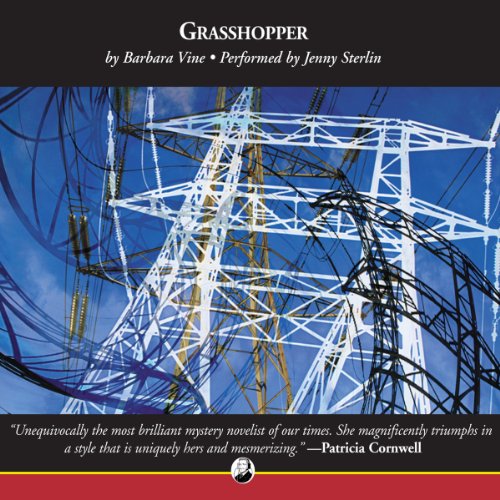 By: Barbara Vine
Narrated by: Jenny Sterlin
Try for $0.00

Ruth Rendell has held her place atop the world of mystery writers for decades, writing dozens of books that have won numerous awards, captivated countless fans, and collected widespread critical acclaim. Writing as Barbara Vine, she is the Edgar Award-winning author of such books as Chimney Sweeper’s Boy and King Solomon’s Carpet. Young Clodagh Brown loves to climb, especially the giant electrical pylons that form a neat row outside her parents’ home. When this obsession breeds tragedy, her shamed family sends her to London for college. As a respite from insufferable classes, she begins climbing atop the local houses with her unique band of friends. But it is a practice that lands the group in a kidnapping scandal - and leads to a terrifying climax on the rooftops.

Grasshopper is a meticulously crafted novel - a sharp and textured thriller infused with layers of psychological suspense. Narrator Jenny Sterlin steps into Clodagh’s unique world and takes readers on a rousing adventure through the Victorian neighborhoods of London.

What listeners say about Grasshopper

If you could sum up Grasshopper in three words, what would they be?

Clodagh Brown is my favorite character because she is a well-developed, likable, and complex character.

The best scenes are those that take place on the rooftops.

This audiobook made me laugh and cry.

Barbara Vine does it again, but this time, the character development is incomparable. This a well-written and well-narrated story. Grasshopper is a must listen.

This has to be one of the very worst books I have listened to. There seemed to be no point whatsoever. Don’t waste your credit. ☹️

Too tedious to finish.

Jenny Sterlin is one of my favorite readers, but even her performance could not carry Grasshopper. The novel has too many unpleasant characters in tedious and repetitive situations, while the more sympathetic main character is just not compelling. I stopped with 6 hours to go. Pity, I really enjoyed The Chimney Sweeper's Boy by Barbara Vine.

There is much, much too much nonessential text. You just want her to get on with it, please.

Would you be willing to try another book from Barbara Vine? Why or why not?

I was enthralled by The Chimney Sweepers Boy, but that had an outstanding reader.

Jenny Sterlin has a very nice voice, but the only way I can describe her narration is "mournful." The other problem is the sound editing. There are unjustified pauses between each sentence that just make the whole experience endless.

should be half the length

What would have made Grasshopper better?

I like some of Vine's books a lot but this one is too long for the story. She repeats herself continuously; on and on and on with very little development in the plot.
Triple yawn.

This is a pretty solid novel. But it didn't quite do it for me. Maybe a little too slow moving? The characters and story a little too far fetched? I'm not sure. I didn't not enjoy it but it didn't captivate me the way really good books do. In other words, I could stop listening without feeling that pull to keep reading.