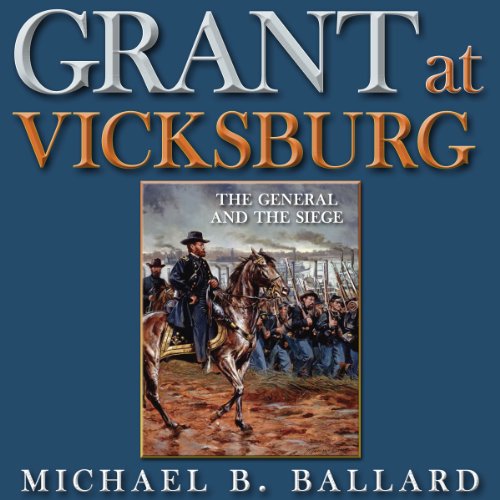 On May 22, 1863, after two failed attempts to take the city of Vicksburg by assault, Major General Ulysses S. Grant declared in a letter to the commander of the Union fleet on the Mississippi River that "the nature of the ground about Vicksburg is such that it can only be taken by a siege." The 47-day siege of Vicksburg orchestrated by Grant resulted in the eventual surrender of the city and fulfilled a major strategic goal for the Union: command of the Mississippi River for the remainder of the war. In this revealing volume, Michael B. Ballard offers the first in-depth exploration of Grant's thoughts and actions during this critical operation, providing a never-before-seen portrait of the general in the midst of one of his most notable achievements.

After an overview of Grant's early Civil War career from his first battle through the early stages of the attacks on Vicksburg, Ballard describes in detail how Grant conducted the siege, examining his military decisions, placement of troops, strategy and tactics, engineering objectives, and relationships with other officers. Grant's worried obsession with a perceived danger of a rear attack by Joseph Johnston's Confederate army, Ballard shows, affected his decision making, and shows how threats of Confederate action occupied more of Grant's time than did the siege itself.

In addition, Ballard soundly dispels a false story about Grant's alleged drinking binge early in the siege that has been taken as truthful by many historians, examines how racism in Grant's army impacted the lives of freed Black people and slaves in the Vicksburg area, and explores Grant's strained relationship with John McClernand, a politically appointed general from Illinois. The audiobook concludes with the surrender of Vicksburg on July 4, 1863, the expulsion of Johnston and his army from the region, and demonstrates the impact of the siege on the outcome on the short and long-terms of Grant's military career.

By analyzing Grant's personality during the siege and how he dealt with myriad issues as both a general and an administrator, Grant at Vicksburg offers a revealing rendering of the legendary general.

This audiobook is published by Southern Illinois University Press.

What listeners say about Grant at Vicksburg