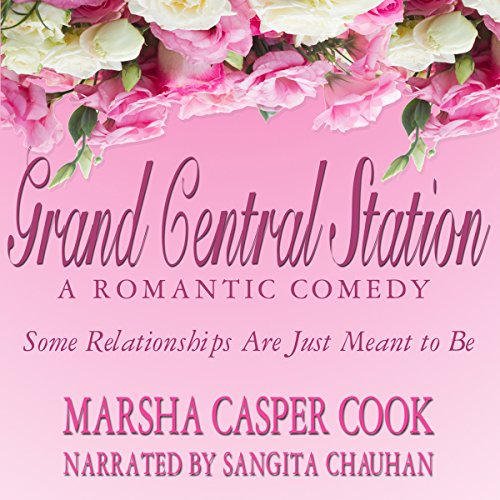 Some Relationships Are Just Meant to Be
By: Marsha Casper Cook
Narrated by: sangita chauhan
Length: 3 hrs and 23 mins
Categories: Romance, Contemporary
3.5 out of 5 stars 3.7 (3 ratings)

A famous child psychologist, who has authored several best-selling books on raising children, discovers he doesn't know as much as he thought he did when he meets a pediatrician and mother of three. Neither of them imagined how their lives would change when they shared a flight headed for Las Vegas for a medical convention.

For Jack Winston and Victoria Feingold, whatever happens in Vegas doesn't stay in Vegas. It follows them back to Chicago.

Jack doesn't want to fail, but he's not sure he's emotionally prepared to live with Victoria's three children. Not to mention her mother, sister, dog, and needy ex-husband.

Grand Central Station is a fast-paced ride and a lot of fun!

A STORY IN VIGNETTES

I have an aspiring author whom I have been speaking to, and I coached him recently that “a problem has to be presented to the reader.” In this story, there are many words, and various vignettes, but there is no problem to be resolved.

I wanted to like the story, but it didn’t go anywhere except to Vegas to get married.

I’m not even sure why the family dog talked, since his voice didn’t add anything to the story.

As you’ll notice, even my blog post is in vignette… because I can’t get a flow from the book. Should I pick up something else from this author? Have you read anything by her and loved it? Tell me what you think.

Narration: Marsha Casper Cook has a sweet British nanny voice. Unfortunately, each sentence ends up being a clipped separate entity, and I think that affected the story.

Note: While I received this book as a gifted audiobook copy via Audiobookworm Promotions Adopt-an-Audiobook, my opinions are my own and are given freely.

Marsha Casper Cook has penned a charming, sweet romantic short listen but in that short time it packed plenty of content (without being rushed)
The characters are wonderfully crafted and sound pretty honest. Their romance is sweet but also complicated by Marsha's extensive familial commitments. The story, though not long covers enough to make it enjoyable and believable.

sangita chauhan does a wonderful job with the naration, managing to convey emotions and characteristics as well as ensuring it was clear who was talking.
I received a copy of this book through Audiobookworm in exchange for my honest review.

Grand Central Station was an appropriately titled fun quick cozy. It was an easy listen with likeable characters and storyline and a relaxing way to spend a rainy afternoon. Two busy people, Victoria and Jack meet and fall in love in Vegas and Jack gets a built in extended family. This is the first book I've listened to written by Marsha Casper Cook and I hope to hear more from her.

Sangita Chauhan's performance was terrific. I enjoyed listening to her. She had a wonderful tone with great voice inflections making this an enjoyable listen. I'll listen to her again as well.

"This book was gifted to me for free at my request and I provided this voluntary review."