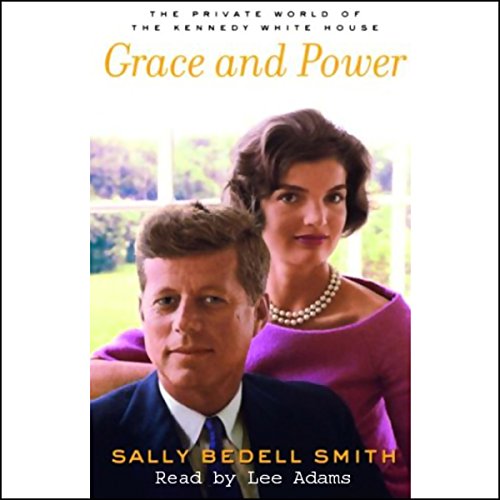 By: Sally Bedell Smith
Narrated by: Lee Adams
Try for $0.00

Having interviewed scores of Kennedy intimates, including many who have never spoken before, and drawing on letters and personal papers made available for the first time, Smith paints a richly detailed picture of the personal relationships behind the high purpose and poiltical drama of the 20th century's most storied presidency.

At the dawn of the 1960s, a 43-year-old president and his 31-year-old first lady - the youngest couple ever to occupy the White House - captivated the world with their easy elegance and their cool conviction that anything was possible. Jack and Jackie Kennedy gathered around them an intensely loyal and brilliant coterie of intellectuals, journalists, diplomats, international jet-setters and artists. Perhaps as never before, Washington was sharply divided between the “ins” and the “outs.”

In his public life, JFK created a New Frontier, stared down the Soviets, and devoted himself to his wife and children. As first lady, Jackie mesmerized foreign leaders and the American people with her style and sophistication, creating a White House renowned for its beauty and culture. Smith brilliantly recreates the glamorous pageant of the Kennedy years, as well as the daily texture of the Kennedys’ marriage, friendships, political associations, and, in Jack’s case, multiple love affairs.

Smith’s striking revelations include new information about what drew Jack to his numerous mistresses - and what effects the relationships ultimately had on the women; about the rivalries and resentments among Kennedy’s advisers; and about the poignant days before and after Kennedy’s assassination.Smith has fashioned a vivid and nuanced portrait not only of two extraordinary individuals but of a new age that sprang to life around them. Shimmering with intelligence and detail, Grace and Power is history at its finest.

"What Ms. Smith has done is to write the first substantial narrative that captures what daily life was really like in the inner sanctum of the White House during the Kennedy years, with Jack and Jackie appropriately cast as the lead actors in the intriguing drama." (The New York Times)
"Eloquently rendered social history....Highly readable account of the White House milieu shaped by John and Jackie Kennedy..." (Publishers Weekly)

What listeners say about Grace and Power

More detail than I wanted

If you want endless details of who dined or partied at the White House, who Jack Kennedy was sleeping with, and what Jackie was wearing when it happened, this book is for you. It's chock full of details about everything and everyone. I was shocked by some of the revelations, and it was fairly titillating; however it is so badly read with endless mis-phrasing and mispronounced words and names, that I nearly gave up on it several times. It was interesting, but a real chore to listen to it. I came away thinking what venal, selfish and self-absorbed people they all were.

Best read of all the Kennedy books written


Five Stars: Well written and very well spoken; interesting aspects of their lives described vividly (almost as though you were watching a movie or an excellent t.v. production. Brilliant. Well worth reading several times.
Highly rececommend.

Would you consider the audio edition of Grace and Power to be better than the print version?

I consider myself a JFK aficionado. So when I saw this book available on audible, I decided to pick it up. Rather than being just a rehash on the same old stories we know about JFK, the author really delves in into what made JFK tick. We are constantly reminded how flawed and careless he was in his personal life, considering he was the President of the United States. We know now that no public figure could get away with his behavior today. But in spite of all that, he was a great president when you consider all the challenges he faced during his administration.

The author puts the reader in every scene as if we were there, from the moment the book opens, moving through the 1960 election, the inauguration, the Bay of Pigs fiasco, the Vienna Summit with Khrushchev, the Berlin Wall crisis, Civil Rights, the Cuban missile crisis, his assassination and the aftermath. She does a masterful job in presenting every scene with clarity and from the various perspectives of the individuals involved, be it Jackie Kennedy, Dave Powers, LBJ, etc.

What does Lee Adams bring to the story that you wouldn’t experience if you just read the book?

She set just the right tone that at first when I downloaded the audiobook, I thought it would take me forever to get through it. Instead, I listened to it in less time than I expected during my routine commute time.

Great book! I'd recommend it to anyone who is a JFK fan.

If you are interested in the detailed human interest side of JFK and Jackie, just be aware the book is also heavy on political detail surrounding world events.

Would you listen to Grace and Power again? Why?

Yes and again and again. So much to process in the political world. Fascinating!

Detailed view into the Kennedy world

If you could sum up Grace and Power in three words, what would they be?

I would say the three aspects I would use are "history, the value of education and the value of connections".

I enjoyed the details provided by Smith--she really gets down the day-to-day information.

Very personal portrait of the Kennedy years: factual but not judgmental. Good balance of politics, current events and "gossip". Well read and worth listening to the unabridged version, although admittedly long. Pedantic in spots, particularly in foreign affairs analysis, but quickly returns to the original pace.

INTERESTING ON MANY LEVELS

What did you love best about Grace and Power?

It covers the election and politics but from a more personal standpoint. well written.

What does Lee Adams bring to the story that you wouldn’t experience if you just read the book?

Jackie's attitude toward being first lady. Her independence and support by JFK.

Well written. Gives another side to the presidency besides the usual "womanizer" and "Kennedy dynasty" cliche.

Great info but was focused on Jacks bed partners far to much ...the interest in who, where, when Jack slept with made me crazy but with that exception was a good read.

Very interesting behind the scenes book

Your producer should make sure that pronunciation of French rooted words is correct - many times the narrator was ignorant of correct pronunciation. Amazing that Caroline Kennedy’s name was consistently mis pronounced. Other than that it was a well researched account and easy to listen to. Positively shocking that Kennedy was a serial womanizer- He spawned a morally decadent cabal and they all paid dearly for it in the end. But they had style!

I must admit I did not listen to the full 20 hours of this. I heard the first five hours and gave up. It's great if you want to know the colour and style of all the dresses Jackie Kennedy wore, and the predilections of all of the white house staff and their partners, no matter how hundrum or mundane. At the point where the author was describing the type and variety of plants that the wife of a minor, undistinguished member of white house staff liked to plant in her front garden, I gave up. A remarkable presidency, a remarkable time - if you want to know how it was lived in terms of the frocks worn by its protagonists, listen to this book. If you are interested in politics and history, read another ...

This is well written and informative. It's reasonably well narrated with only a few mispronunciations: but becomes hugely disappointing when near the end it pushes the wholly inaccurate 'lone gunman' theory. Sad.