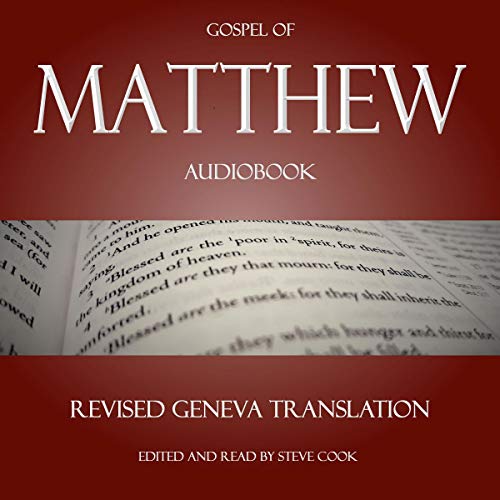 Gospel of Matthew Audiobook: From the Revised Geneva Translation

By: Matthew the Apostle
Narrated by: Steve Cook
Try for $0.00

The Revised Geneva Translation (RGT) is a 21st-century update of the very first widely distributed version of the Holy Bible in English, The Geneva Bible.

Just as in all preceding centuries, Biblical text in the 1500s was meant to be heard and seen, as much as read, because so many of those who received it were illiterate (especially Gentiles) and needed to memorize it and speak it back to each other often in order to facilitate meditation.

To that end, the RGT strives to preserve the textual cadence and poetry that is so essential to Elizabethan literature, while at the same time eliminating archaic and potentially distracting 16th-century words, phrases, and punctuation. There is no commentary or other human adornment, only the simple, powerful, illuminating word of God (John 12:48-50).

In scholarly terms, it is a formal or complete equivalency, based on the Byzantine text-type family of manuscripts. At this writing, the RGT is one of only three major modern translations of the Holy Bible to be so (the others being the NKJV and MEV), and the only one based primarily on the Received Text, rather than the Majority.

All other modern translations, including the NASB, ESV, NIV, and NLT, use the shorter Alexandrian text-type family of manuscripts as their base text, which, in addition to excluding passages such as Mark 16:9-20, John 7:53-8:11, and the "Johannine Comma" of 1 John 5:7-8, also contains hundreds of other undocumented omissions from the Received Text.

It is our hope that this project will be a living and active Bible for this generation, built for hearing and doing (Matthew 7:24), and that it will be profitable for teaching, convicting, correcting, and instructing in righteousness (2 Timothy 3:16)....

What listeners say about Gospel of Matthew Audiobook: From the Revised Geneva Translation