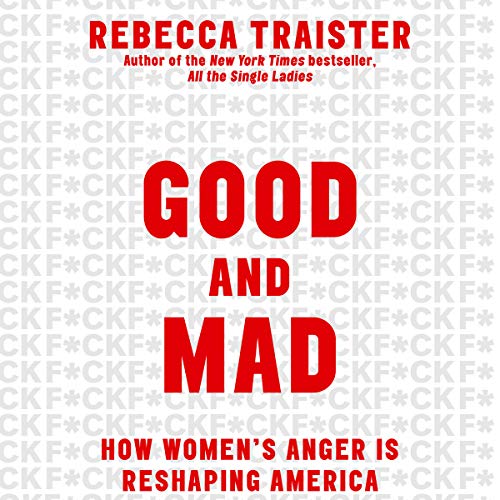 From Rebecca Traister, the New York Times best-selling author of All the Single Ladies - whom Anne Lamott called 'the most brilliant voice on feminism in this country' - comes a vital, incisive exploration into the transformative power of female anger and its ability to transcend into a political movement.

In the year 2018, it seems as if women’s anger has suddenly erupted into the public conversation. But long before Pantsuit Nation, before the Women’s March and before the #MeToo movement, women’s anger was not only politically catalytic - but politically problematic. The story of female fury and its cultural significance demonstrates the long history of bitter resentment that has enshrouded women’s slow rise to political power in America as well as the ways that anger is received when it comes from women as opposed to when it comes from men.

With eloquence and fervour, Rebecca tracks the history of female anger as political fuel - from suffragettes chaining themselves to the White House to office workers vacating their buildings after Clarence Thomas was confirmed to the Supreme Court. Here Traister explores women’s anger at both men and other women, anger between ideological allies and foes and the varied ways anger is perceived based on its owner as well as the history of caricaturing and delegitimising female anger and the way women’s collective fury has become transformative political fuel - as is most certainly occurring today. She deconstructs society’s (and the media’s) condemnation of female emotion (notably, rage) and the impact of their resulting repercussions.

Highlighting a double standard perpetuated against women by all sexes and its disastrous, stultifying effect, Traister’s latest is timely and crucial. It offers a glimpse into the galvanising force of women’s collective anger, which, when harnessed, can change history.

What listeners say about Good and Mad

Everyone needs to read this book

Good and Mad does an excellent job of explaining the history and context of women’s anger and how it has lead to the me too movement. Invalidates and contextualize is the role of women’s anger in American politics. Further, it highlights how anger can be used as a tool for action and engagement. Everyone needs to read this book.

A classic of our time

It would be a shame if this book got lost in the way so many women's stories have in the past. Read, listen and identify. A narrative of our time.

A really interesting and illuminating work about the current and historical political climate and how women have and can continue to use their anger to change things for the better. As someone who often cries when I get angry, which infuriates me to no end, I found the way Traister sets out and explains the reasons why women's anger is seen as 'irrational' and 'unattractive' really interesting and thought provoking. I learned a lot about some interesting historical figures and events which I'd previously never heard of, however the book does focus solely on America. Which is no surprise, but being British I did struggle to follow some of the references. Having said this I think this book is useful and interesting reading for anyone (male & female), not just Americans.

Phenomenal book - everyone should listen to it!

Rebecca Traister has knocked it out the park with this book - brilliantly weaving together past and present into a sweeping narrative that helps make sense of our current moment & makes you think deeply about where we might be going. All this while being wry & funny. She's a fabulous reader too. Can't recommend highly enough.

the emancipation through rage comes in waves. this book recounts the recent, trump-related, one. it is a sober reassessment of anger as a tool and constructive force, which is way too often taken away from women. interesting read.