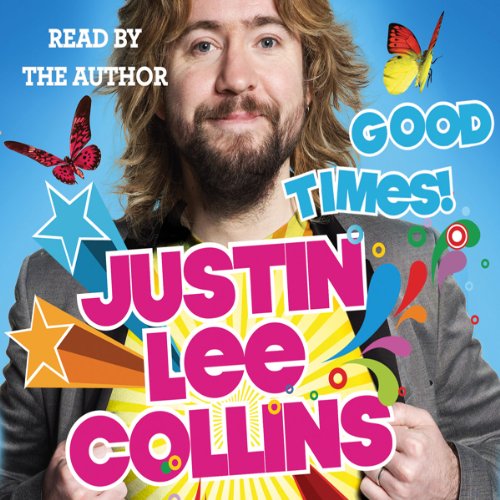 He street jams in spandex and wrestles in lycra. He's been a magician, a ventriloquist and a clown. He's hugged some of the biggest stars in the world, and pretty much anyone else who's crossed his path. He mucks about, wears silly costumes, and manhandles his friend Alan Carr on national TV on a weekly basis. And people have literally paid him to do all this. Good times!

But life wasn't always so kind to young Justin. The years stacking shelves at Bristol's Marks and Spencer weren't exactly a high point. Being told to 'walk faster' by his boss and being given a final warning...bad times.

But mere retail couldn't keep him down! This hilarious coming-of-age story follows his journey from collecting Star Wars toys as a small boy to schmoozing Carrie Fisher in her Hollywood home, and becoming one of the most loved and instantly recognised faces on British TV.

For each new twist his life has taken, he hasn't changed a bit. He's as bouncy, funny, shambolic, huggable, and of course, Bristolian, as he's ever been. This is the story of how it all happened - by accident.

But this is not just a routine celebrity autobiography/memoir - that would be boring. Especially for Justin himself, whose attention span is that of a small child at the best of times. Instead, this is JLC utilising his remarkable photographic memory to ponder the unfeasibly peculiar and funny moments that have defined his life, and desperately trying to make sense of it all. Rock on!

Loved this book. Very interesting and especially the part about the Ewok Soap and meeting Carrie Fisher. Well done Justin

Im 50/50 on this one good, steady, enjoyable book, a month after I Listened to it I cant remember much about it, I think I agree with the last guy, bit too early maybe, still, was happy to buy it because I really Like the JLC.

Got of a lot of time for the guy when hes on telly so was interested in hearing his background. The book is well read and nice that he actually reads it, but felt a bit let down afterwards when it becomes clear the guy is still very early on in his career. Its a bit like Wayne Rooney or Lewis Hamilton doing biographies. 10-15 years too early I think, and the whole notion of cashing in on a book during a purple patch of his career actually flies in the face of the ethics he describes in the book i.e. not bothered by fame, confident in his ability to get work etc.

If you've got a credit burning a hole in your pocket go for it and really like the guy then go for it but don't go out your way.

JLC... What a lege! I love his accent so to hear him narrate his story makes it worth listening to. I honestly hoped I'd listen to this over a month but I couldn't stop listening! At times I laughed out loud, good times! Excellent listen.