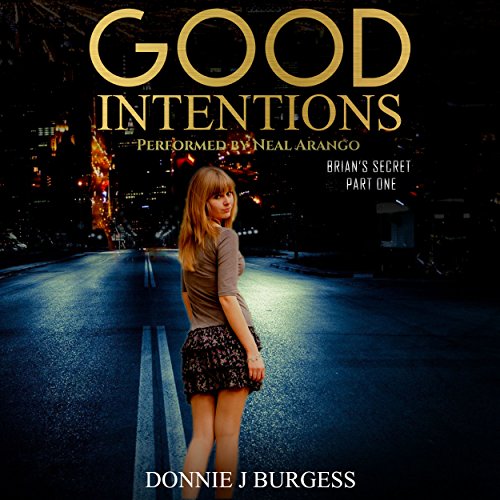 By: Donnie Burgess
Narrated by: Neal Arango
Try for $0.00

When his plane touches down in Portland, all Brian Palmer is expecting to do is wink, flash a smile, and close another deal. That all changes when he sees Cassie sitting outside the airport, scared, hurt, and alone. He approaches her with nothing but good intentions....

That chance encounter triggers a series of events, which will repeatedly test Brian's character, values, and morals.

On the brink of closing the biggest deal of his life, Brian is faced with some very difficult choices. How much is he willing to do to help a girl in need? How far is he prepared to go to close a deal? And will he be able to live with his decisions?

What listeners say about Good Intentions

I hope to Read/Listen to more!!

This was a Great Story & I can't wait for more!! Donnie is a Good author! I'm glad I found this book & can't wait to get my hands on more by him!! Neal The NARRATOR DID a good job, the only thing that bothered me was the echo I kept getting! I DON'T think that's his fault! I was able to get over it!! I never want a book to end cause I get to go to my fantasy World so my ONLY OTHER complaint would be I wish it was longer! I guess that just leaves me waiting & excited for more!!

good read. loved the narrator. willnlisten to more by the author and narrator

Success comes at a cost!

This audiobook was provided by the author, narrator, or publisher at no cost in exchange for an unbiased review courtesy of Audiobook Blast. Brian finally landed his big deal, but not without the help of his young friend. He allowed her to help him reach his goal, but at what cost? This was such a good book, slow moving at first, but hooked me good about a quarter of the way through. I wasn't happy with the abrupt ending, but that only means I will have to read more by this author!

The plot of this book is good, I felt it building from the start.I could feel the protaganist acting good to begin and then his confusion and guilt for what had happened.


I was glad to see this is part one of a trilogy, because of the abrupt ending of this part. I really love reoccurring characters and a deeper story line.

The narration was very good.

A great listen and well written story that kept me hooked. The narrator was excellent and really brought the story to life. I don’t usually listen to books in this category, but will be looking for more from this author in the future.

* I was given a free copy of the book from AudiobookBlast dot com in exchange for a fair and honest review.

Donnie Burgess Does it Again -This is a Must Read!

I most definitely recommend this audiobook to a friend. Donnie outdoes himself with the first book of this series. The book has an excellent plot and story line that builds consistently, keeping you interested, intrigued and wanting more. The author delves into some sensitive issues and puts you on an emotional ride like none other. He manages to evoke an array of emotions from you. For me it was anger, sympathy and empathy. The characters are extremely well written and developed so much so that you feel as if you know them personally. The ending was abrupt and unexpected and left me wanting more. I'm excited for book 2 of this series.

What is there to not like about Neal Arango's performance. As always, Neals' performance is on point. He portrays each character with the right amount of emotion. He has a wide array of character voices that make each character easily recognizable. He has great pace, tone and inflection that develop the feeling the author is going for at any given time. As usual, Neal Arangos' performance enhances the story and brings it to a different level that I believe reading the print version would do.

This audiobook was provided by the author at no cost for an honest and unbiased review.

Great story with a superb performance

If you could sum up Good Intentions in three words, what would they be?

I found Brian's constant justifications for all his terrible decisions was quite amusing. He is clearly an awful person who thinks he is doing good things. The way he goes back in forth in his mind until he convinces himself he is making the right decision had me laughing out lout more than once.

Which character – as performed by Neal Arango – was your favorite?

From a performance standpoint, I'd have to say Neal's performance made me really feel for Cassie. I think he portrayed her very well. Also thought his portrayal of Crandall was very effective. It literally made my skin crawl whenever he spoke, he was so disgusting.

The ending was quite shocking, and I found myself so angry at Brian that if was reading the book, it probably would have made me throw it to the ground and stomp all over it.

Excited to see that this is the first of a series. Really interested to see where it goes from here.

Brian first meets Cassie sitting on a bench. He wants to help her having found out about the abuse she suffered from her mother.
Cassie found an apartment and got a job but didn't have money for the deposit so Brian gives her the money.
After it's to late he realized he treated her not much better than her mother.
I wasn't thrilled with the ending but this is part one. hoping the next book will bring everything together.
The narrator has done a good job with his narration.

I received a copy of this audible free at my request. I gladly provide my review.

Not what I expected, in a good way

I found myself relating to a lot of the choices Brian makes. I like to believe I wouldn't have been as self-centered as some were, but if I'm honest with myself I'm not sure.

THis isn't a story with some out-there premise that likely will never happen to someone. It's down to earth, real and honestly something that could happen to anyone on any day. What started out with the best of intentions can take twists and turns that you never expect.

I'm not sure honestly what I expected going into this book, part of the draw to it was that I share the male character's first name. Whatever I expected this wasn't it, and honestly I enjoyed it more because of it.

I was given a free copy of this book at my request in exchange for an honest review.

I loved it. The narration was great and kept you entertained. The author did a great job with the character builds and plot. This was my first book by this author and I look forward to reading more books in this series! I was given this free review copy audiobook at my request and have voluntarily left this review.

I would never recommend this audio book. But not for the usual reasons that it was poorly written. No, instead because it wrenched my heart to the point that I am still questioning what I would do, were I in Bryan's situation. I am feeling such unbearable confusion, I simply don't know what to feel.
From the beginning, the character Cassie was the villain, I saw her as a marriage breaker and had a very low opinion of her- I certainly wanted her out of the picture. But when that came to be, I empathised with the guilt Bryan felt.

It was daunting, I couldn't forsee the end, nor could I forsee that I would have this reaction. Believe me, at first I believed that Bryan was the victim of a naive, but not innocent, young girl's manipulation and incessantly reckless behaviour. She was attempting to lure a vulnerable Bryan into committing adultery. So, I had my sympathies with Ellie (his actual wife) and Bryan. I would say, once I realised Cassie's motives, in the beginning, I resented her and her ability to influence Bryan.

Though, Burgess cleverly introduces a twist which I more than appreciated. At the end we learn that good intentions are never enough in being a good person: the actions are always more important. Just as the proverb 'actioms speak louder than words', implies. Bryan failed to act out on his intention and inevitability, because of the severity of the situation, what inevitably follows is disaster. All throughout he believed he was helping Cassie, that he was making her happier, but we quickly learn as the problems escalate, that she was not any better off.

This audio book kept me occupied for most of the morning up until now, and I know that it will remain in my thoughts long after. This was undoubtedly a good book, worth hearing, the narrator performed well and was suited to do the voices. Now, the writing was equally good, I particularly liked how the writer intelligently influenced the mood in various parts of the writing: at the start it was light, and even witty. Later on when it draws on sensitive issues, including prostitution, abuse, it becomes darker- more dangerous. It constantly flirts between these different atmospheres: an emotional rollercoaster, if you will. I'm sure you understand why I still can't process my feelings.

This book may not offer much in terms of a refuge, or comfort, but it offers gratitude and puts our own problems into perspective. So yes, it is every bit deserving of five stars. I would say that audio book was intended more for mature audiences, the issues it alludes to, and those that it revolves around, are extremely sensitive and require considerable maturity.

NB: I received this audio book through Audio Book Blast. And it can be listened to as a stand- alone novel.