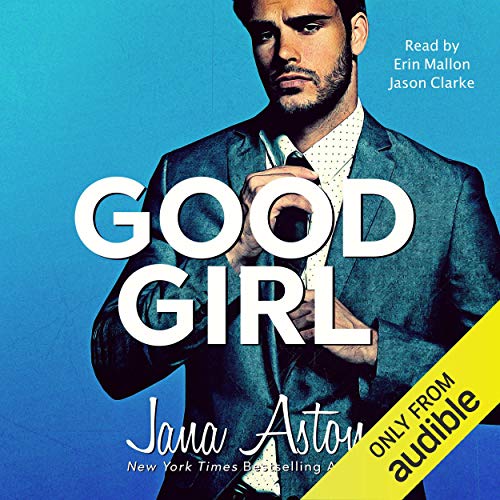 By: Jana Aston
Narrated by: Jason Clarke,Erin Mallon
Free with a 30-day trial

I've always been a good girl. I work hard, I follow the rules, I always achieve my goals. But sometimes good girls want things that aren't good for them. Or someone who isn't good for them. Like their new boss. And sometimes they do very bad things to get his attention. Like sell their virginity in an auction.

Who knew he'd be so very, very mad? Maybe this was not my best laid plan....

What listeners say about Good Girl

There aren’t a lot of authors who can make me happy 100% of the time. There’s always that one book that isn’t as good as all the rest. Well that is not the case with Jana Aston. Everything she writes is pure gold. She may just be my favorite author. Her sense of humor is one of a kind and she has a way of blending comedy and erotica in a way that I didn’t know was even possible. From the first chapter you’re hooked. You love and can relate to the characters and you get sucked into their crazy adventures of falling in love. There’s never a ton of angst, which I love!!! My only problem with this book was that it ended. PLEASE don’t make me wait a year for another book from you Jana. I need it now. Your narrators are PERFECTION! Please don’t ever use anyone but Jason Clarke ❤️❤️❤️ top notch performances on a top notch book. This one is worth all the credits.

This book was an absolute pleasure to listen to. It was my first book by Jana Aston and I can say it will not be my last!

Let me start with the story. It was comprised with so much humor! I love the characters. They were quirky, sexy, and just plain awesome. The storyline was unique and fun. It kept me hooked the whole way.

Erin Mallon and Jason Clarke went above and beyond for this one. It was Fan-Freaking-Tastic! Erin's portrayal of the Quirky Virgin was the best thing I have heard in a long time.

Thank you to Jana, Erin, and Jason for giving us this treasure. This is high up my rec list!

I really enjoyed this. I wasn't expecting to laugh out loud and I did many times during this story. It is a silly, light and fun romance. No huge angst. Great summer listen.

Hilarious in a bad way; too implausible

Where do I even begin?

At first I wasn’t sure I could listen to this because the female character is so clueless and annoying. Then the absurdity became hilarious. Hilariously but in a bad way because I was laughing AT the character, not with her. I mean, it was painful at time how stupidly she is written. (Ugh! She has NO filter on her mouths and the constant verbal diarrhea gets annoying! Even if half of it was internal monologue instead of spoken she would have been less annoying.) Not to mention she is so completely immature.

Further, no man is going to stick around/put up with a woman like her. I know it’s fiction, but there is point when it becomes too unrealistic and it actually ruins the story. The whole auction thing is more believable than that this girl could get a guy. It’s really not surprising she’s a 22 year old virgin, based upon how she is written. The excuse given is nothing more than that, an excuse.

Oh, and why does he have to be 12 years older than her? Too much is talked about it to not find it odd. He inherited everything so there’s no reason he couldn’t be 8 years, or such, older than her. Then it wouldn’t be an issue and no need for an entire conversation about it. It’s fiction; this is the easiest part to change and make it less awkward.

Despite the above, the actual relationship, however implausible, started to move at a reasonable pace. But suddenly after almost no time and absolutely no significant plot point (like, absolutely randomly) the guy suddenly realized he loves her. There should be some reason, something in the story, that causes the shift in his emotions.

As for the narration, the only real complaint is the two readers are recorded at significantly different speeds. The female reader is super fast. I actually had to change the listening speed between readers. I normally listen at 2x, but when it was the female reader I had to back it down to 1.5x just to be able to hear what was being said, but even then it was still fast. It’s also a bit unclear sometimes what on spoken vs internal monologue, probably because of the female’s speed. This also often eliminated gaps between scenes. There were also a couple points where it seemed like a sentence or two was missing - leap in what was happening. I’m not sure if that is due to the writing or the recording.

Overall, the story had great potential, even if the character was intended to be quirky, but it was ruined by a character that was written too bizarre (one should never be laughing at the heroin, especially not non-stop), and an entire act should have been added to the plot (around 1 hour before the end), to explain the jump from first getting to know each other to realization of being in love. It’s like the author either had a page limit when writing and ran out of space, or had an idea but an incomplete one that was never worked to a full story.

Last thing...what’s that romance novel test where the female characters have to talk about something other than sex/men. This totally fails that test!

Fun and sexy in the best way possible!

Jana Aston definitely has a way with rom-coms! They are always so over the top and fun to read! Good Girl was a fun escape from a stressful week that I desperately needed! I laughed through the entire book! I really hope Jana writes a book about the crazy roommate and strip club owner! I need to read their story!

The narration was amazing! I absolutely LOVE Erin Mallon and having her do a book with Jason Clarke takes my love to the next level!

LITERALLY brilliant. If you love Bridget Jones type comedy, you'll love this rom-com. New stand alone fave. great characters along with wonderful and totally believable narrators. At some points, I was laughing so hard while cooking dinner, that my toddler looked at me like I was insane. I'd recommend this book to any girl, and even left a copy on my husband's nightstand. (I think he'll get a kick out of it) I'll be purchasing a few copies around Christmas for my closest girlfriends.

This book was so witty and funny. A quick read but still a good one!
I loved the narrators

Jana Aston is the best! This was a great story and Lidia was funny. Narrators did a fantastic job!

I downloaded this book after reading Jan Aston's other book, "Wrong," which I enjoyed. I don't recall that book containing long inner monologues. If it did, I enjoyed the story so much I failed to notice. With "Good Girl" they dragged to the point of annoyance and so much so that I quit the book after the first few chapters. I also found the story too farfetched.

Fabulous! I absolutely loved this book! Cute, smart, snarky, and hot! An absolute must read!

This was a fun sexy listen both narrators were great. 2 of my favourites. They tell the story so well

a good easy listening story to get you through a couple of free hours in the day. Has humour and a good HEA.

I just finished listening to the audiobook. I enjoyed the story of Lydia & Rhys, it's a fun and engaging read. Lydia is the most hilarious leading lady, her thought processes are nuts and her love of Goodwilling and sewing make her unique. Rhys is clueless. They are both naive but in different ways. Lydia in knowledge/practice, Rhys in understanding. There are lots of laugh out lots moments, even when Lydia is in full on panic mode, her talk with her bestie made me giggle.
My only disappointment is that the story wasn't longer, I really would have loved to read more about them learning to be a couple. A few chapters between the last chapter and the epilogue, would have done the trick.
So get reading and see of you can earn your first badge.

This is one funny read. I have never laughed so much whilst listening to an audiobook as I did with this one. I absolutely loved it! Lydia is the sweetest, naive, most adorable, not to mention the most eager to learn virgin I've ever read. Rhys doesn't stand a chance!
Good Girl by Jana Aston is romantic comedy at its best that is brought to life by the fantastic narrators. You won't want to miss it!

OMG I was either broadly smiling or just bust out laughing.

I couldn’t stop laughing. Brilliant writing, Erin did a fabulous job and Jana out did herself. I’m keeping this copy.

If you ever wanted a way out of a bad mood, this audiobook book is the perfect solution. The story is funny, sweet, sexy and all around happy. Narrators did a great job of bringing Lydia and Reece to life. Highly recommended

Good on the whole

This book left me feeling good and there was plenty of humour in it which pushed the rating up for me. The characters and relationship development need some work, and one area of the story is summarised and rushed through which seemed quite strange. However, it’s still loads better than lots of other books in this genre and Payton (side character) made me laugh so I’ve been more generous with my rating.

Don't even think twice, just buy it. You won't be sorry. Light hearted, sexy and funny. LOVED it!

This book is funny, and sweet and all the things a good romance book should be. I really enjoyed it!

i absolutely loved this book. a great funny light hearted and a HEA
fantastic narration finished in a day.