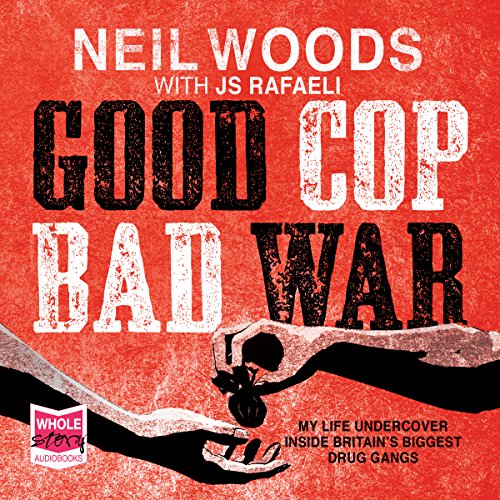 As an undercover police officer with the drugs squad, Neil Woods regularly risked his life on the streets, dealing with some of the most violent and unpredictable criminals in Britain.

Good Cop, Bad War is a unique story about a man with a striking ability to infiltrate and extinguish drug gangs but who, as the success of his operations grows, becomes disillusioned with the war on drugs, as he sees how it demonizes those who need help whilst empowering the very worst elements in society. This is an action-packed true-account listen like no other.

Not just a good story but a good point well made

Would you consider the audio edition of Good Cop, Bad War to be better than the print version?

I've not read the print version so can't compare

It's a true story and is good in its own right, but it's the truth - the war on drugs is so counterproductive its bleeding obvious to anyone who thinks about it. This is someone who is extremely knowledgeable about his subject and his conclusions are based on practical reality as well as common sense.

The best scenes are the ones where he's a virtual derelict and facing serious violence. Not enjoyable because he's in that state but because I was really impressed with his dedication. Also the scenes where he proves the jobsworth clipboard coppers how badly wrong they are

There were one or two amusing moments, I won't spoil them for you

I was riveted to this book. It's depressing that ever more violent criminals are getting ever more powerful thanks to the phony War on Drugs but it's cause for some optimism that at least someone with relevant experience is talking sense. I'd rather my kids brought up in a society run by this guy than with those currently in charge of drug laws. Neil, keep up the good work :)

This thinking could stop 90‰ all street violence. Just give it a listen. Eye opening

Every now and then I have come across audiobooks that I just want to keep listening to. Good Cop, Bad War is such a book, I finished it 32 hours after downloading it.

It’s quite a tale, humane and full of insight into the living hell lived out by so many addicts on our streets. Highly recommended.

very interesting read full of facts and insight into a world you could never imagine.

Makes you shift your thinking and perhaps we should be tackling the issue very differently.

A considered and thoughtful story of undercover work, one which leads to the author questioning his role and the role of the justice system in dealing with drug addicts - the so called war on drugs. The situations this guy found himself in were truely terrifying, often with poor senior management. This was a great book and I enjoyed it immensely.

Gripping, exciting, profound. Truly excellent read, eye opening in many ways. I only hope more people come round to this way of thinking.

Interesting insight to the UK Police force with a fascinating story to go with it.

So much truth and understanding

Awesome once it started I couldn’t stop. Takes people like Neil to make a better change. Thank you

A brilliant book. If only politicians and the Police would read this and actually do what he says the world would be a much better place overnight! Thank you Mr Woods.

Everything about this story is really interesting and written in such a captivating way that I couldn't stop listening, I'd heard Neil on Scroobius Pip's podcast which led me to this book. The narrater is really good. Highly recommended

If you have any opinions about the war on drugs, put them on hold until you read this book.

A must read for everyone! Very insightful and thought provoking definetly a book to put on your must read list.

As an anarchist I rarely have a good word to say for the police but this book is insightful and compassionate. Woods fiercely argues for a rational alternative to the woeful war on drugs (really a war on society ) and as an undercover cop directly involved in the war his message has to be taken seriously.