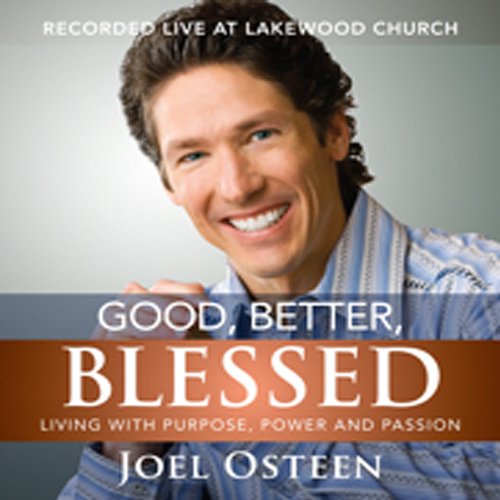 In less than five years, Joel Osteen has emerged as America's best-selling inspirational audio author, thanks to the industry-leading sales of his audiobooks. But the hundreds of thousands of listeners he has reached with his audiobooks - and even the millions of readers who have bought his books - represent just a fraction of the tens of millions of viewers and listeners who know him only as the dynamic, uplifting preacher who speaks so memorably from the pulpit every Sunday at widely-televised services at his Lakewood Church in Houston.

Now, for the first time ever, the retail market gets its first taste of Joel's incomparable live persona with Good, Better, Blessed. This collection of 10 complete sermons (or 'messages,' as they're known to Lakewood members and viewers) from Joel's broadcasts offers traditional audio and book customers their first chance to experience Joel in his original element, as he moves and inspires the huge crowds who come or tune in to hear him preach each Sunday.

Demonstrating once more why he has transcended the traditional Christian market with his approach to timeless self-help topics, he addresses such perennial and popular issues as:

I enjoy listening to this to Good, Better, Best. I've listened to each time I feel weak or down. Joel Osteen as a way to uplift your entire spirit. I would definitely recommend this book to anyone

A collection of motivating sermons from Joel Osteen. Inspiration and motivation as well as hope included. Love listening to Joel Osteen

A blessing that will make you love your life.

What made the experience of listening to Good, Better, Blessed the most enjoyable?

I loved every part of this title. Joel Osteen is so genuine, so giving, so full of the Spirit.
I listened during my commute to and from work, and was sad when it was done. I highly recommend this if you want to feel the joy of our Lord while you smile. Your heart will sing.

BEST Message for Everyone to Hear

this is a collection of sermons the messages are so relevant for our times of mediocrity. Joel is so insightful and inspiring. he will help you be your best . This is my favorite of all time! Listen and be blessed!

this book is one of a kind fantastic to listen and learn from all his books are great.

So inspiring and timeless in its message

I think this is maybe my favorite book The Joel Osteen did along with I Declare.

I listened to this complete audio book in just a few days. Joel has a great voice and powerful messages. It's great to listen to at work or in tough times. If you're feeling down, having a bad day, or just want to keep yourself in a positive mood, play this and within minutes something will speak to you and you will begin to feel better.

This book was good timing for me!!

As always Joel delivers a message that hits home and give practical ways to better your life.

it was great and inspirational. I am glad I purchased it and glad to hear.

This book/ audio book is amazing, depending on your perspective and how and if you receive this message, it genuinely changes lives. Its uprooted in the Word if The Most High and presented in such an inspirational, simple and genuine way that anyone of any background and faith will be moved. Thanks Joel! Loved it x

loved it. was disappointed when it finished but inspired me to be a better person