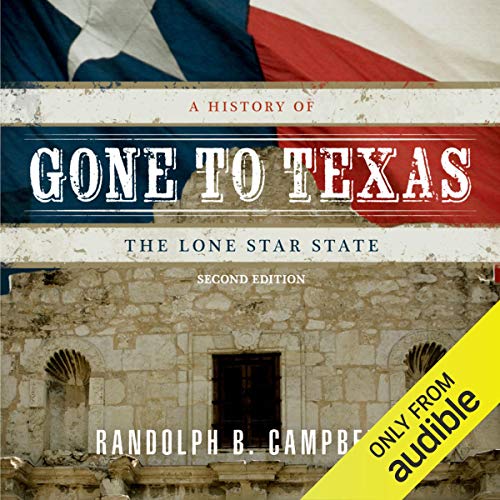 By: Randolph B. Campbell
Narrated by: Jacob Sommer
Try for $0.00

Gone to Texas engagingly tells the story of the Lone Star State, from the arrival of humans in the Panhandle more than 10,000 years ago to the opening of the 21st Century. Focusing on the state's successive waves of immigrants, the audiobook offers an inclusive view of the vast array of Texans who, often in conflict with each other and always in a struggle with the land, created a history and an idea of Texas.

What listeners say about Gone to Texas

Good history from year zero through about 1962

Would you listen to Gone to Texas again? Why?

GTT has a lot of specific election and demographic data about Texas, it is a good reference for that sort thing.

What was one of the most memorable moments of Gone to Texas?

The early history of Texas and the details about the various Texas Native American tribes.

The author is clearly a liberal Democrat. That's fine for most of the book, but it distorts his telling of the history of post WWII Texas.

To give you one example, he connects Lee Harvey Oswald with vague 'conservative groups'. He never mentions that Oswald was literally a card carrying Communist.

The narrator has an excellent reading voice, but he was let down by an incompetent producer. Sommer has no idea how to pronounce the many Tejano based personal and place names we use in Texas.

It took me a while to figure out who this 'Juan Sagwin' person was for example. I'd never heard of 'U-va-lee' Texas, which is really pronounced 'U-vall-dee'. Many names and place names are mangled this way.

It's the job of the audio book producer to catch these kinds of mistakes, not the narrator.

As a third generation Texan who grew up in Corpus Christi, I enjoyed this book. I learned a lot. The narrator was easy to understand, but he needed to talk with a Texas history teacher in Texas to learn how to pronounce some things Texas. When he mentioned the Karen-Kawa Indians I had no idea what he was talking about until he mentioned they were on the Gulf coast, then I realized he was talking about the Karankawa Indians. Anahuac was butchered also. Oh well, I'll get over it.

Like other Texans stated, it would be preferable if the narrator was more familiar with the Texas pronunciation of places.

Would you consider the audio edition of Gone to Texas to be better than the print version?

Not sure...if the print version has pictures then I would say no, but if it's entirely published text, then I'd say sure.

What was one of the most memorable moments of Gone to Texas?

The events surrounding Texas Independence from Mexico is always fascinating to read about.

The narrator should have learned how to pronounce Texas towns and cities the way they're meant to be pronounced. As a Texas Native, it was extremely frustrating to hear him butcher the names of towns like "Nacogdoces" and "Natchitoches". Even "New Orleans" and "Sabine" were cringe worthy to hear the narrator mispronounce. I understand that by not living in and around these areas there has to be a level of forgiveness for people who can't pronounce them correctly, but if you're going to read the news or much less an audio book on Texas History, at minimum they should know how to pronounce the names correctly.

"The legends, mystique, and truth behind the Lone Star State"

This was an excellent read and great overview of Texas history. I really enjoyed the way "Gone To Texas" was laid out and can appreciate many of the questions posed by Campbell.

GTT will be something that I'd like to re-read every year or so, and as a Texas Native could identify with much of what Campbell was writing about. I also enjoyed his cultural perspectives that offered a look at Texans and the Texas mystique.

From a people perspective, I also enjoyed at how Campbell spoke about the state's darker history when dealing with Indians and slaves. We never really got that perspective in school, so it was good to read about what actually happened during those troublesome times of people learning to live side-by-side and adjust to various cultures.

Pros: a great, exhaustive look at Texas history from the earliest Native people to 2011.
Cons: a bit heavy with all of the political changes and people; however I understand how the politics helped shape Texas into what it is today. Just a little hard to get through compared to the other material.
Bottom line: an excellent summary of Texas history for anyone interested in this great state's origins, history, and future.

exhaustive, and a little exhausting

This is a long book, at almost 30 hours, and if you're like me and listen to your Audible books during your commute (and you live close to work) it takes a while to get through it. But I'm glad I did. Campbell tells the story of Texas from the arrival of the first settlers 10,000 years ago until the 21st century. What I like a lot about the book is that it tells the story of Texas from the point of view of each of its peoples, not just the American legends and history we were all taught in school (if you went to school in Texas).
For the Anglos, Texas was a great opportunity to acquire cheap and fertile land and become independent of whatever ills they left behind in the old United States, and after the Civil War, a place for southern refugees to escape the destruction of the south and start over. For Germans and Jews fleeing oppression and chaos in Europe, it offered an open landscape with few limitations. And later, opportunities for people from around the world.
For the Mexicans, it's is the story of losing a country to immigrants who, for the most part, had no interest in the language, flag, religion or customs of their newly adopted home. Mexicans were crowded out by sheer numbers, institutionalized discrimination and occasional violence. More recently Mexicans and other Hispanics have returned and will soon predominate in Texas once again.
For African Americans, the story of Texas begins with the forced relocation from home and family, as slave owners brought their slaves to Texas to grow cotton and other crops. Later came Jim Crow, the KKK, segregation and the battle for civil rights. The history of African Americans in Texas is not a pretty one.
For the native Americans the story of Texas is about dislocation, betrayal and annihilation, the end of a battle that had begun decades before Texas was even a destination.
The author shows us the rise of the myth of the cowboy, from its beginnings on Mexican haciendas to the glory days of the cattle drives. We learn the origins and history of the Texas Rangers (not the baseball team, although that's discussed as well) - the good as well as the bad. We learn the details of Mexican political history that led to the rise and fall of Santa Anna and the revolution. Of course the battles of the Texas Revolution are covered, as well as enough biography (good and bad) of each of the players to get a real feel for the personalities on all sides of the question of Texas independence.
It's especially interesting, as a 5th generation Texan, to hear the stories behind the men whose names cover the Texas map. Not just Austin and Houston, but Lubbock and Worth and Throckmorton and Rice and Navarro and on and on - all the place names I associate with my travels around the state.
I also enjoyed hearing the details of the political debates from the past 200 years. You'll recognize them as exactly the same as what you hear today in election ads.
My only real objection to the audio book is the reader. A book on Texas should be read by a Texan, someone who knows how to pronounce words like Mexia and Wichita, he even gets Clements wrong.
But if you can get past that, you'll find this a very interesting, complete and thought provoking history of all the millions of people who have gone to Texas.

Good understanding of Texas. listened to it three times for my history class. made life so much easier.

You gotta get a Texan narrator

The book was great and the narration was good except the narrator didn't properly pronounce the names of many texas names. Bexar= bayhar. Mexia= mahaya. Uvalde= youvaldee. There were others that I can't remember but those stuck out. It is such a Texan thing to have weird pronunciations but someone narrating a Texas book who presumably conferred with the author should know how these things are pronounced in the.. Texan language? I was really confused for about 3/4 of the book thinking to myself, "Now where the hell is bear county?" (His pronunciation of Bexar) Another example of Texans doing things however they damn well please I guess. Other than that I highly recommend this comprehensive and enjoyable book to everyone

The narrator struggled with words that should have been obvious. A great in-depth story though.

I grew up in South Texas and was used to hearing names pronounced a certain way. This narrator inconsistently mispronounces names like Karankawa, Kiowa, Tonkawa, Refugio, Nueces, Lavaca, Bowie, Anahuac, Rene Robert Cavalier Sieur de la Salle, etc. The tone and tempo of the reading is good, but not getting basic Texan words right is a little distracting.

I adore Texas history! I've lived in Texas off and on for many years and the people and the state really speak to me. This book, however, does not. It's well researched and contains some interesting material but the writing just doesn't shine...and with this topic it needs to. James Michener's "Texas" which, albeit, is historical fiction, will really give you a much better idea of Texas and Texans. I recommend Michener over this.

Get to The Alamo!

Ironically, rather like Texas, this book is very large and very dry!

The narration style doesn't really help, to be honest, as it is somewhat monotonous.

I try to see books through to the end but, being honest, I am struggling with this one. If I do and my views change then I will write an addendum review. However I am struggling at present and find myself continuously saying "Oh just hurry up and get to The Alamo!".