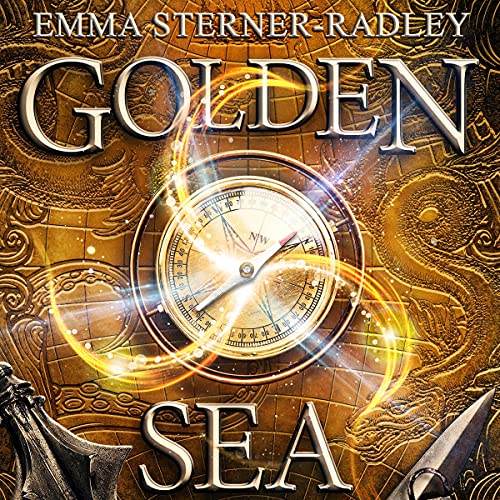 Our four mapmaking magicians are back at the Hall of Explorers. As they continue their studies, their journey to find new lands is brought forward following a calamitous event. However, seafaring and exploring turns out to be even more dangerous and complicated than they expected.

Soon they have to battle not only the perilous waves, the king’s cruel plans, and sea monsters, but also their emotions. Eleksander pines for Hale, who in turn joins Sabina in having feelings for Avelynne. Meanwhile, Avelynne is realizing her lack of romantic interest may run deeper than she thought. Meeting new people on their journey makes things even more complex.

Feelings will, however, have to take the backseat, as they realize that the magical conspiracy they are part of is even bigger than they thought and that the ocean is full of surprises; some wonderful, but far too many of them dangerous beyond measure. And like the king of Cavarra, the sea doesn’t show mercy.

What listeners say about Golden Sea

I thought that book two was better than the first one, which could be because the first one was set in the academy where they're learning everything and the second one is where they are actually going out on an adventure. But I also really enjoyed the fluidity of sexuality that was able to take place within this book and not have it specific to one gender or another. I wish the third book was available to download as well, or that they're even is a third book. definitely recommend!

The second book in the map making magicians series made me craving for many more.
The balance between the greater plot and the individual dynamics, the introspection, the representation and the beautiful writing make these books a worth read not just for young adult.
The universe Emma built is just topped by PJ Morgan narration making these amazing characters come to life in a beautiful and unique way.
I can just patiently wait for the next adventures, knowing now that we can’t be disappointed by what the author is building for us!