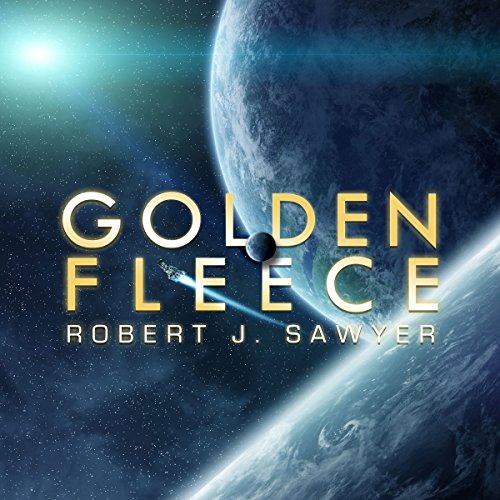 By: Robert. J. Sawyer
Narrated by: Steven Menasche
Try for $0.00

Aboard Argo, a colonization ship bound for Eta Cephei IV, people are very close - there's no other choice. So when Aaron Rossman's ex-wife dies in what seems to be a bizarre accident, everyone offers their sympathy, politely keeping their suspicions of suicide to themselves. But Aaron cannot simply accept her death. He must know the truth: Was it an accident, or did she commit suicide? When Aaron discovers the truth behind her death, he is faced with a terrible secret - a secret that could cost him his life.

What listeners say about Golden Fleece

After reading this book, I can honestly say that I prefer Sawyer’s later works – they are terrific!

This book was ok, I don’t have much to criticize… I just didn’t love it.

Robert. J. Sawyer is my favorite science fiction writer in current years. I read all of his books. This was apparently one of his earlier works and one has to make allowances for that, but his later works show how far he has risen in the ranks of the genre.

What other book might you compare Golden Fleece to and why?

I guess the closest book I can compare it to would be "2001: A Space Odessey" because of the premise that a computer has taken over control of the ship.

Change the narrator. This is the first book I have listened to narrated by Steven Menasche and I must say that it was a very uncomfortable experience. He narrates with a certain accent and all of the character voices sound the same. It added confusion to a complicated plot and many times I was list as to who was speaking.

Do you think Golden Fleece needs a follow-up book? Why or why not?

It definitely could be followed up with many stories, since with book the long journey is just beginning.

Robert. J. Sawyer does not disappoint.

There's Better Sawyer out there

This is a much lesser Sawyer work... The story is kinda average, and none of the characters are what I'd call likeable... It's not a horrible book, but definitely on the mediocre side of good... Some of the ideas are intriguing, but aren't fleshed out very well... The Closterphobia of isolation, both on the ship, and within the AI is interesting... Some of themedical science and neural mapping is pretty cool... A bit of the ghost in the machine going on throughout, both literally and figuratively... I thought it was humorous that the MMPI is still being used so far in the future w/ so much more learning and tech to draw upon... Much of the dialogue is melodramatic, both from the humans and AI... The narration is pretty poor... It works, for the most part for the AI, but w/ the people comes across as whiny and shrill when going from voice to voice, especially female voices... I can appreciate the uber intelligent AI being judgmental and self involved, but it was a bit overdone... The underlying mystery wasn't complicated, and never really got the deductive juices flowing... Most will see the final reveal coming a mile away... I'd think twice before spending a credit, much less full purchase price... Wait for a sale and you won't be as disappointed...

Normally I love Sawyer, but I hated Golden Fleece

I only finished out of hope it would improve. I hated the narrator who was deliberately trying to sound smug and superior and was extremely annoying because of it. There wasn't enough effort to individualize characters and that added confusion. The plot was overly busy and unconvincing. I'll avoid spoilers and say the underlying plot was a trite and overused one even when he wrote the book.There was too much pedophilia as a background issue. None of the characters was particularly likeable. I usually don't mind the hard science Sawyer sprinkles in, and I try to absorb and understand it. But all the relativistic calculations left me rolling my eyes. Only read this if you are a Sawyer fan and a completist.

This was one of the worst narration performances I have ever heard! It was so bad it likely influenced my opinion of the story. If you are a Robert J. Sawyer fan like I am I suggest skipping the audiobook and reading this one the old fashioned way.

It should be said however that there is some terrible stuff in the history of the main human character. No need to actually describe a child being molested for crying out loud!

Except for the WWW series and Red Planet Blues, Golden Fleece was the last of Sawyer's novels I hadn't read.

It's clear that this was written early in his career. It mostly lacks the characterization and deep sociological issues that mark most of his work and separate him from his peers. It does have an interesting premise (a novel written from the first person perspective of a computer), as well as an interesting murder mystery and some hard science, but it didn't come together with that usual Sawyer magic. This was made worse by a voice actor who I found grating and overwrought.

If you are new to Sawyer, go read some of his other stuff first (Flashforward, Illegal Alien, Calculating God) and come back to this once you've exhausted the rest of his catalog.

what an imagination, Sawyer's stories always feel unique and familiar at the same time.

Malevolent AI, a new panel and aliens; what more could you want

I'm a long time fan, and have long since quaffed the Sawyer cool aid, but this sets high expectations too. While not so riveting as hominds and flash forward, this is still an entertaining story that will surprise you in the end. Nicely done.

Very disappointed in this novel. Sawyer was my first intro sci fi ages ago and love his work. This one wasn't great, it wasn't even that good. Too bad