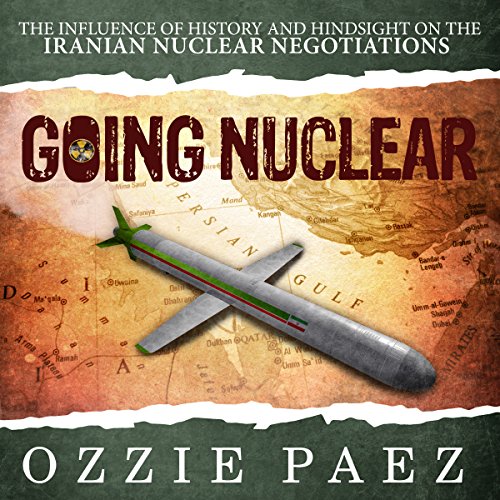 The Influence of History and Hindsight on the Iranian Nuclear Negotiations
By: Ozzie Paez
Narrated by: Curt Simmons
Length: 49 mins
Categories: Business & Careers, Career Success
3.5 out of 5 stars 3.3 (3 ratings)

By: Ozzie Paez
Narrated by: Curt Simmons
Free with a 30-day trial

Going Nuclear focuses on one of the most critical negotiations in recent memory, the efforts to prevent Iran from becoming a nuclear power. Iran and the P5+1 countries recently reached an agreement on a framework to limit the Iranian nuclear weapons program, but differences remain, particularly with regional countries who were not at the table. The fate of the region, the possibility of war, and the potential for a nuclear arms race in the Middle East will largely depend on how Israel and regional Sunni Arab countries judge the agreement.

Going Nuclear offers a unique perspective on the negotiations and potential repercussions based on important findings and lessons from psychology, neuroscience, and decision making. It explores the influence of history and hindsight bias on Russia, China, Iran, Israel, and Sunni Arab countries, and the implications for the United States and its Western partners. It discusses the history of proliferation and its benefits, costs, risks, and uncertainties for countries that succeeded in becoming nuclear powers. Those factors are at play as Iran seeks to follow in their footsteps, while its neighbors remained determined to prevent it.

Going Nuclear reaches beyond the saga of the Iranian negotiations to discuss the influence of history and hindsight in other contexts, including technical analysis, decision making, leadership, and business.

What listeners say about Going Nuclear