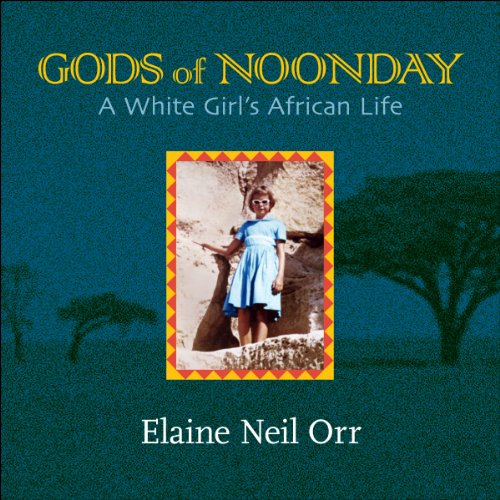 The daughter of medical missionaries, Elaine Neil Orr was born in Nigeria in 1954, in the midst of the national movement that would lead to independence from Great Britain. But as she tells it in her captivating memoir, Orr did not grow up feeling American, but rather identified with Nigerian culture.

Orr came back to America to attend high school, feeling the loss of Nigeria keenly. It was only in her forties, in the crisis of kidney failure, that she began to recover her African life. In writing Gods of Noonday she came to understand her double-rootedness: in the Christian church and the Yoruba shrine, the piano and the talking drum. Memory took her back from Duke Medical Center in North Carolina to the shores of West Africa and her hometown of Ogbomosho in the land of the Yoruba people.

Interweaving the lush mission compounds with Nigerian culture, furloughs in the American South with boarding school in Nigeria, and eventually Orr's failing health, the narrative builds in intensity as she recognizes that only through recovering her homeland can she find the strength to survive. Taking its place with classics such as Out of Africa and more recent works like The Poisonwood Bibleand Don't Let's Go to the Dogs Tonight, Gods of Noondayis a deeply felt, courageous portrait of a woman's life.

What listeners say about Gods of Noonday

The author;s discussion and relation of Southern Baptist"s is mostly accurate. She leaves a lot out about the behavior of Nigerians and the nature of diabetes spending most of time in an idylic reminiscence of stories living in the past. The life of illness she lived leaves too much out about the politics of getting a multiple transplant. Her medical information is too but extremely brief.Someone is left out of the story.There is too much missing about how she lives now. It is definitely not a "Poisonwood Bible" comparison..

Would you recommend Gods of Noonday to your friends? Why or why not?

No there is not enough realistic detail to be helpful too dreamy.

Yes the narrator was ok.

What else would you have wanted to know about Elaine Neil Orr’s life?

The truth about what happened. Such as sources for the causes of diabetes and then the causes of kidnet. They are not scientific and if she decided to use them why and when. I have had Type 1 DM 42 years.

If you don't have diabetes or are not a Baptist or a recovering Baptist esoecialy privileged Baptist you won't make it though the book.l