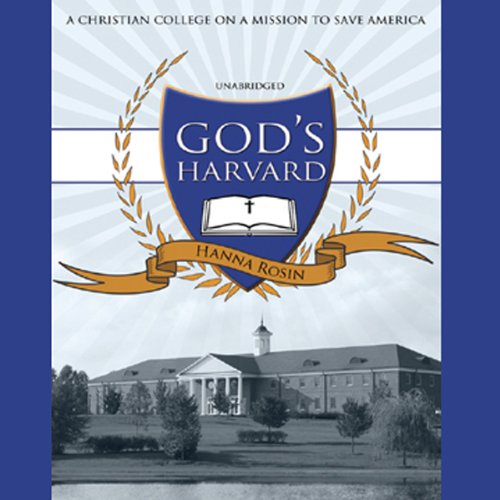 A Christian College on a Mission to Save America
By: Hanna Rosin
Narrated by: Bernadette Dunne
Length: 9 hrs and 21 mins
Categories: Religion & Spirituality, Christianity
4 out of 5 stars 3.9 (24 ratings)

Since 2000, America's most ambitious young evangelicals have been making their way to Patrick Henry College in Virginia, a small Christian school that has earned the nickname "God's Harvard". Most of these students are home-schoolers whose idealism and discipline put the average American teenager to shame. The school grooms them to become the Christian elite of tomorrow, dispatching them to the front lines of politics, entertainment, and science to wage the battle to take back a godless nation.

Hanna Rosin spent a year and a half following these students from campus to Congress, conservative think tanks, Hollywood, and other centers of influence. Her account captures a nerve center of the evangelical movement at a moment of maximum influence and also crisis, as it struggles to remake the modern world in its own image.

"Making it clear that the American evangelical population is growing in political and cultural influence, Rosin provides an illuminating, accessible guide to the beliefs, aspirations and ongoing challenges of its next generation." ( Publishers Weekly)

With such a divisive issue as religious indoctrination at the university level at author Rosin's feet; she seemingly reduced her review to what appeared as anecdotal stories or even entries in her diary. What opinions she provided were "tongue in check" and frankly, not provocative.

4 of 6 people found this review helpful

More people should know about this movement

This book is very informative, which is good because hardly anyone knows the difference between the wealthy dominionists described in this book and the holy rollers on TV who get all the press. Finally a book that does get it. I wish it had explained more about the adults behind this movement and focused less on student life. I guess that's because I've read book after book about theocracy and most of them fall far short of unearthing this wealthy stealth dominionist movement. They all tend to focus on the wild-eyed holy rollers in a bunker somewhere. I would like to know even more about this movement with the real power. Another book that does get it right about these wealthy, powerful, behind-the-scenes dominioninsts is "The Family" by Jeff Sharlet. The rest of them seem to focus on holy rolling Pentecostals with no power, and miss how much real power these stealth, staid, quiet, dominionists have. I enjoyed the parts of this book that explained the difference between the Gothardites at Patrick Henry and the more affluent, savvy, dominionists who don't "look funny" to the outside world. I don't understand why the founder of Patrick Henry is against St. Augustine and what that fight was about. I don't understand Calvinism. I thought Patrick Henry was Calvinist but this book seems to explain that it is not. So many dominionists are Calvinist and I can't understand how Calvinism is tied to dominionism or Gothard's hierarchy of authority. Whom should I fear more, Calvinists, patriocentrists, or the savvy people behind Patrick Henry and the ones described in Sharlet's book? I wish someone would write "Calvinism for Dummies" and explain how and if Calvinism relates to this movement or if Calvinism is not to blame. The patriocentrists on the web have me scared to drive past a Presbyterian church. Anyway how do these people keep their kids from rebelling when they get older?