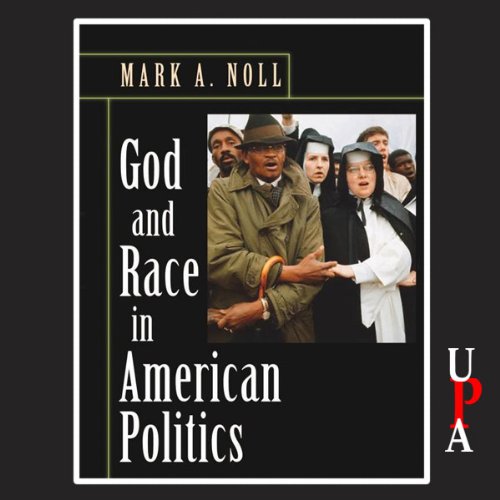 God and Race in American Politics

Mark Noll, one of the most influential historians of American religion writing today, traces the explosive political effects of the religious intermingling with race.

Noll demonstrates how supporters and opponents of slavery and segregation drew equally on the Bible to justify the morality of their positions. He shows how a common evangelical heritage supported Jim Crow discrimination and contributed powerfully to the black theology of liberation preached by Martin Luther King Jr.

In probing such connections, Noll takes listeners from the 1830 slave revolt of Nat Turner through Reconstruction and the long Jim Crow era, from the civil rights movement of the 1950s and 1960s to "values" voting in recent presidential elections. He argues that the greatest transformations in American political history, from the Civil War through the civil rights revolution and beyond, constitute an interconnected narrative in which opposing appeals to Biblical truth gave rise to often-contradictory religious and moral complexities. And he shows how this heritage remains alive today in controversies surrounding stem-cell research and abortion as well as civil rights reform.

God and Race in American Politics is a panoramic history that reveals the profound role of religion in American political history and in American discourse on race and social justice. The book is published by Princeton University Press.

"[Noll's] work will be a must read for scholars of U.S. religious and political history." ( Choice)

What listeners say about God and Race in American Politics

American history requires God and Race to be whole

I very much respect Mark Noll’s work as a historian. So after re-reading The Civil War as Theological Crisis, I looked around to see if there were any audiobooks of Noll’s works. I listen to a lot of audiobooks because a lot of my job is processing data. As long as I don’t have to write, I can listen.

The only book at Audible by Noll other than The Civil War as Theological Crisis was God and Race in American Politics.

Noll is primarily known as a historian of North American Evangelicalism. But this is a natural followup to his Civil War as Theological Crisis. Instead of looking at the theological response to issues of race and slavery (as he did in Civil War), Noll expands his view to take a quick survey at how Race and Religion interacted over the history of the US until the 2004 Presidential Election.

As you might expect a good historian to say, the reality is much more complicated than the traditional story that is told in your 4th grade US history class. But Noll does a very good job surveying those complications in less than 200 pages.

His first chapter covers a lot of similar ground as the Civil War as theological crisis. Essentially, the common reading of the bible prior to the Civil War was that slavery was a biblical practice, and calling for the end of slavery as a theological statement for most people meant that they had to reject the common reading of scripture and be accused of rejecting orthodox Christianity. And many abolitionists did explicitly reject Christianity (or at least the more orthodox forms of Christianity). But here, Noll spends a good bit of time observing that it was not slavery, but racially based slavery that was the real issue. The widespread belief in white racial superiority meant that Christians were able to accept the plain reading of scripture that said that slavery was acceptable, but not the plain reading of scripture that said that Blacks were of one faith with Whites.

This became even more pronounced in the post-civil war era. Because many of those abolitionists were more focused on the restraining the institutions of government than on solving the problems of integrating former slaves into the political and social system of the US.

It is when Noll starts talking about the rise of Jim Crow and then moves into the Civil Rights era that I think the book really starts being important. Traditional history if it talks about religion and Jim Crow or Civil Rights tends to paint a fairly straight forword picture. Noll suggests that while religion is important (and he believes that it is), it is important to different sides for different reasons.

Noll suggests that post Civil War, the segregationist impulses of the Christian church still used religious language and revivalist methodology, but there was a shift and by the Civil Rights era, defense of segregation was mostly using very little scriptural support. Similarly, prior to the Civil War, almost no abolitionist pointed to scripture to defend the equality of Black humanity (because there was a wide spread belief that Blacks were literally a separate and a sub-human species.) But as African American churches became independent and started mining the depths of scripture for themselves, a new story emerged that a racially insensitive White majority slowly became aware of.

Noll points out that the institutions of Christianity may not have been supportive of Civil Rights, but they were also not supportive of segregation either. There was very real problems of socially integrating White and Black culture that had been separate.

And so Noll suggests that the modern political history needs to be viewed through the Civil Rights movement to properly understand it. It is not as much that the separation between the Republican White Evangelicals and the Democratic African Americans are theologically separate, but politically separate as a response to the movements of the Civil Rights era. And while the Civil Rights era cannot be properly told without the African American church, the continued separation is not primarily theological, but historical.

This is a VERY brief retelling of Noll’s own brief book. So I really skimmed over most of Noll’s argument. At the end of the book, Noll has a brief theological response. And I think that Noll is both hopeful, but has strong words for the church, and government, about how the role of how race influences both theology and political leanings. Ignoring that influence continues to keep Christians separate.

(originally posted on my blog at Bookwi.se)

excellent overview of what the title identifies