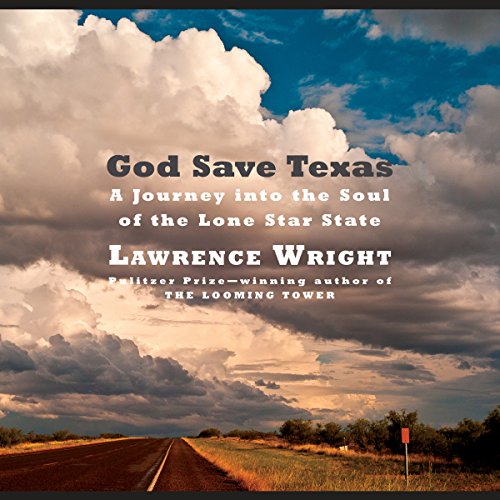 An NPR Best Book of the Year

God Save Texas is a journey through the most controversial state in America. It is a red state, but the cities are blue and among the most diverse in the nation. Oil is still king, but Texas now leads California in technology exports. Low taxes and minimal regulation have produced extraordinary growth, but also striking income disparities. Texas looks a lot like the America that Donald Trump wants to create.

Bringing together the historical and the contemporary, the political and the personal, Texas native Lawrence Wright gives us a colorful, wide-ranging portrait of a state that not only reflects our country as it is, but as it may become - and reveals how the battle for Texas’s soul encompasses us all.

"Superb.... [Wright's] most personal work yet, an elegant mixture of autobiography and long-form journalism, remarkably free of elitist bias on the one hand, and pithy guidebook pronouncements on the other." (David Oshinsky, The New York Times Book Review)

“A love letter to a place.... Wright writes about Texas with the fervor, knowledge, and ambivalence that comes from deep-seated familiarity.” (Willard Spiegelman, The Wall Street Journal)

“After tackling 9/11 and Scientology, journalist Lawrence Wright wrangles his toughest subject yet: home, the Lone Star State. With a balance of deep reporting and memoir, the New Yorker staff writer offers a personal history of Texas, a place both singular and the bellwether of American politics and morality. It’s a different approach, and one that Wright nails.” (GQ)

What listeners say about God Save Texas

Great writing! Wright does a fantastic job explaining modern Texas. He throws in some history, a little geography & politics painting a detailed picture of our messed up, awesome, red-neck & modern state. He presents both sides (AM Texas & FM Texas, as he puts it). As an “FM” Houstonian & 7th generation Texan I am constantly trying to come to terms with our current state of affairs. How did we possibly get this extreme?? (And backwards, I might add!). He’s helped me find some clarity.

Thanks for A Come - to - Jesus understanding

An honest, colorful and deeply personal history of Texas. Wright helped me understand the mysteries this place held from me. A New York City girl, I married a Texan when I was only 19 and puzzled over my in laws and their ways. I enjoyed listening to Wright read and felt that cozy camp fire Intimacy that brings a great tale into your heart.

The best book about Texas

Lawrence Wright is in my opinion the greatest writer in America today. From his work on Al-Qaeda (The Looming Tower) to the Church of Scientology (Going Clear), Wright is brilliant in studying/understanding Americana, and this is on full display here in God Save Texas. I had a hard time pressing pause on this book because I was so engrossed by it. From the history of right-wing radio, the Texas Legislature, Texas political dynasties like the LBJ and Bush family, and even to Texas music and the state of gentrification in the state, like my hometown of Austin. Few books and writers have been able to get a perfect encapsulation of what it means to be a Texan and the identity of this state as good as Lawrence Wright has done with his new book. Writing this review makes me want to listen to this book again.

This book would have been far better without Wright’s Trump hating comments and outward display of a flawed liberal ideology.

More memoir than anything

This book was well written from the author's subjective position as someone who has a lot of history in the state, including provocative decades like the 60s. He's got lots of great stories about powerful and influential people who he has interacted with personally. It makes for a very interesting listen, but with more of a memoir slant than the title/subtitle lead me to expect. Overall, a pleasant listen with good clear performance and interesting subject matter.

I'll never go back but Lawrence Wright's storytelling made it seem like a less terrible idea.

I was hoping to learn about the history and development of the state of Texas. While I did learn some facts about the state, the subjects covered are not in chronological order, so I couldn’t see how the topics were related or how an event affected the state’s history. Some of the anecdotes are interesting, but the book fails to draw a cohesive picture. In my opinion the book reads more like a “memoir of a Texan” than the objective view of the state I was hoping for. In fairness to the author, perhaps that was not his goal. The author’s narration is a weakness.

Lawrence Wright employs memoir, history, political essays, and notes from a bemused observer in a largely successful effort to unwrap the riddle-wrapped mystery inside the enigma that is contemporary Texas. Why the "Loon Star State" has produced so many forward thinkers and social progressives while spawning a retrograde brand of politics that even Donald Trump has not yet matched is the overarching theme. Wright spends several chapters unraveling the Byzantine workings of the state legislature's 2017 session, in which Lt. Gov. Dan Patrick, a man whose entire persona seems spun from synthetics, matched wits with House Speaker Pete Straus, a more traditional Conservative. Yet the book is not just about the state's political leanings. Wright tours the state, visiting sites made shrines by Texas musicians like Buddy Holly, Bob Wills, and Willie Nelson. He investigates the offbeat appeal of Marfa, a West Texas town made famous by artistic emigres and unexplained lights in the desert. Austin, Dallas, San Antonio, and El Paso receive insightful, yet brief tributes to their unique mixtures of Southern, Western, Latino, East Coast, and West Coast elements blended with Texas sauce. Wright steers away from Texas cliches but leaves the reader wanting more stories of big hats, with or without the cattle.

Especially enjoyed the storytelling of last 50 yrs of history of each region of TX. Many fascinating facts and invites into growth, economy and culture of TX in last 40-50 yrs. While I appreciate Wright’s political view, got tiresome by last few chapters. That aside, a Must read if thinking of becoming a Texan.

Excellent book for the Texas novice!

I listened to this book in anticipation of moving to Texas as an East coaster. This book has given me a tremendous amount of insight into the state and has made me more empathetic to Texas views. The writing is beautiful and I love the narration!