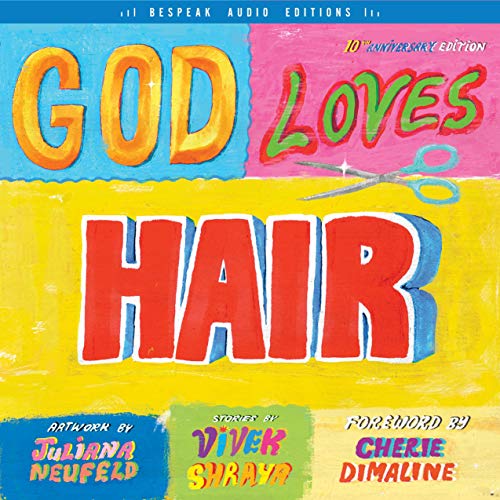 A 10th-anniversary edition of Vivek Shraya's first book: a YA story collection that celebrates racial, gender, and religious diversity.

In 2010, Vivek Shraya self-published God Loves Hair, her first book; since then, Vivek has published six more titles, including a novel, poetry collection, graphic novel, and children's picture book, while also working as an artist, musician, and academic.

God Loves Hair is a collection of short stories that follows a tender, intelligent, and curious child who navigates the complex realms of gender creativity, queerness, brownness, religion, and belonging. This 10th-anniversary edition includes a foreword by award-winning YA writer Cherie Dimaline (The Marrow Thieves), as well as a new preface and story.

Told with the poignant insight and honesty that only the voice of a young narrator can convey, God Loves Hair is a moving and ultimately joyous portrait of the resiliency of youth.

Bespeak Audio Editions brings Canadian voices to the world with audiobook editions of some of the country’s greatest works of literature, performed by Canadian actors.

“A lyrical meditation on growing up queer, brown, and Hindu.... Each vignette beautifully captures the tension Shraya’s younger self felt navigating the intersections of gender, race, and faith. The author's stunningly honest voice is suffused with tenderness not only for her past self, but also for other young people currently coming to terms with multiple identities in families and societies that may not be accepting of their full selves.” (Kirkus Reviews, starred)