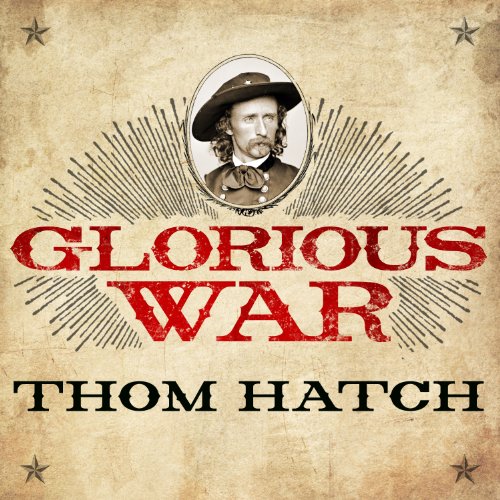 Glorious War, the thrilling and definitive biography of George Armstrong Custer's Civil War years, is nothing short of a heart-pounding cavalry charge through the battlefield heroics that thrust the gallant young officer into the national spotlight in the midst of the country's darkest hours. From West Point to the daring actions that propelled him to the rank of general at age twenty-three to his unlikely romance with Libbie Bacon, Custer's exploits are the stuff of legend.

Always leading his men from the front with a personal courage seldom seen before or since, he was a key part of nearly every major engagement in the east. Not only did Custer capture the first battle flag taken by the Union and receive the white flag of surrender at Appomattox, but his field generalship at Gettysburg against Confederate cavalry General Jeb Stuart had historic implications in changing the course of that pivotal battle.

For decades, historians have looked at Custer strictly through the lens of his death on the frontier, casting him as a failure. While some may say that the events that took place at the Little Bighorn are illustrative of America's bloody westward expansion, they have in the process unjustly eclipsed Custer's otherwise extraordinarily life and outstanding career and fall far short of encompassing his incredible service to his country.

This biography of thundering cannons, pounding hooves, and stunning successes tells the true story of the origins of one of history's most dynamic and misunderstood figures. Award-winning historian Thom Hatch reexamines Custer's early career to rebalance the scales and show why Custer's epic fall could never have happened without the spectacular rise that made him an American legend.

"A lively and very readable account of the early career of George Armstrong Custer." (Larry McMurtry, author of Custer)

What listeners say about Glorious War

The Civil War record of GAC deserves the telling, and this book is an aid, although riven with prose whose purpleness out-flashes John Pelham's flying artillery at dusk. Plenty of tactical and operational information which does much to elucidate Custer's "Rock Star" status which arose during the conflict and which haunted and drove him for the rest of his life.

Who would you have cast as narrator instead of James C. Lewis?

Almost anyone. Mister Lewis clearly knows next to nothing about the subject matter, and throughout, his serial mispronunciations are one of the less endearing features of his oddly paced, strangely emphasized and occasionally sing-song narration. In combination with the sometimes melodramatic prose, it often comes across as nearer to parody than history.

Thom Hath writes a great detailed book on Sister's Civil War exploits that shows as a true warrior, oustanding leader that inspired had men to achieve great results for th Union Calvary. His units engagement of JEB Stuart a Gettysburg was boring shirt of sheer courage. Great in n this historical view of Genal Custer.

I think an 11 year old who knows nothing about the Civil War might enjoy this book.

What was most disappointing about Thom Hatch’s story?

He is a poor story teller. His prose uses cliche phrases and words that weren't used in the 1860's. His book also includes major historical inaccuracies. He states that Winfield Scott was offered command of all Southern forces...duh! He is obviously not a student of the era.

Who would you have cast as narrator instead of James C. Lewis?

The narrator mispronounces the names of rivers, generals and battlefields.

I have read over 100 books on Civil War history and this comes in dead last.

Custer in the Civil War, excellent!