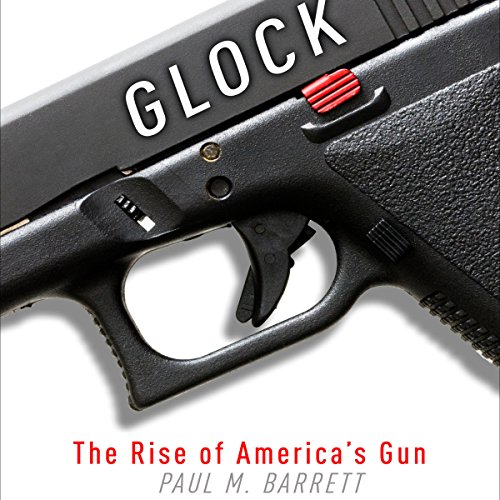 By: Paul M. Barrett
Narrated by: Kiff VandenHeuvel
Try for $0.00

Based on 15 years of research, Glock is the riveting story of the weapon that has become known as America’s gun. Today the Glock pistol has been embraced by two-thirds of all U.S. police departments, glamorized in countless Hollywood movies, and featured as a ubiquitous presence on prime-time TV. It has been rhapsodized by hip-hop artists, and coveted by cops and crooks alike.

Created in 1982 by Gaston Glock, an obscure Austrian curtain-rod manufacturer, and swiftly adopted by the Austrian army, the Glock pistol, with its lightweight plastic frame and large-capacity spring-action magazine, arrived in America at a fortuitous time. Law enforcement agencies had concluded that their agents and officers, armed with standard six-round revolvers, were getting "outgunned" by drug dealers with semi-automatic pistols. They needed a new gun.

When Karl Water, a firearm salesman based in the U.S. first saw a Glock in 1984, his reaction was, “Jeez, that’s ugly.” But the advantages of the pistol soon became apparent. The standard semi-automatic Glock could fire as many as 17 bullets from its magazine without reloading. (One equipped with an extended 33 cartridge magazine was used in Tucson to shoot Gabrielle Giffords and 19 others). It was built with only 36 parts that were interchangeable with those of other models. You could drop it underwater, toss it from a helicopter, or leave it out in the snow, and it would still fire. It was reliable, accurate, lightweight, and cheaper to produce than Smith and Wesson’s revolver. Made in part of hardened plastic, it was even rumored (incorrectly) to be invisible to airport security screening.

Filled with corporate intrigue, political maneuvering, Hollywood glitz, bloody shoot-outs - and an attempt on Gaston Glock’s life by a former lieutenant - Glock is at once the inside account of how Glock the company went about marketing its pistol to police agencies and later the public, as well as a compelling chronicle of the evolution of gun culture in America.

“This book - from a top-notch reporter - will enlighten you about both gun culture and business culture. It’s fascinating, even-handed, and packs considerable punch!” (Bill McKibben, best-selling author of The End of Nature, Deep Economy, and The Age of Missing Information)
“ Glock is a riveting tale with masterful pacing and meticulous research. Paul Barrett knows his subject intimately, and it shows.... It’s a must-read for anyone with an interest in handguns or the firearm industry or even American pop culture.” (Cameron Hopkins, editor in chief, Combat Tactics magazine; American Rifleman’s Industry Insider blog)
“With his customary insight and crystal-clear style, Paul Barrett has told the story of how a simple toolmaker from Austria came to be the dominant force in the manufacture and sale of pistols in the United States.... Glock is not at all just for the gun enthusiast. This book is for anyone concerned about the level of gun violence in America, and that should be all of us.” (Richard Aborn, president, Citizens Crime Commission of New York City; former president, Handgun Control, Inc.)

What listeners say about Glock

Interesting story. Could have done w/o anti gun rhetoric

He does a good job of telling the biography of the Glock rise, even showing both sides of the gun debate fairly. But then at times, diverts deceptively into anti-2nd amendment pronouncements without facts or statistics.

For example, multiple times in the book he makes a matter of fact statement saying that having a government mandated reduction in magazine capacity to ten would clearly work in curtailing the deaths of innocents by the hands of mass murderers.

This is so ridiculous and so typically utopian.

So picture a future where there is a nation wide limit to 10 rounds in the magazine. The would be mass killer simply purchases the old, now likely illegal to even own, magazines on the black market and goes about his merry evil ways, while the average citizen, choosing not to break the law, has five 10 round mags sitting next to the bed by the gun. Now, as the bad guys break into his house brandishing their old and illegal 24 and 33 round mags, our hapless homeowner runs out of ammo before the bad guys do and begins fumbling for the extra mags in the dark. He and his family are neatly dispatched by the bad guys. Yet another example of liberal/socialists thinking they can fix the human condition when many of us know that is not in our powers.

Would you listen to Glock again? Why?

Yes I would, and I have! It is informative, in depth, and very revealing about the inner workings of one of the biggest firearms manufacturers in the world, love um or hate um the business qualities of this book alone are fantastic!

What other book might you compare Glock to and why?

There's really nothing else like Glock out there. Maybe a few books on modifying or gunsmithing but nothing about the company. This book is one of a kind.

Smooth inflection all the way through

Yes, and I was lucky enough to work in a job where I was able to listen to it all the way through. And listened to it a couple more times that week just for the basics of the book!

Great book but there needs to be an updated version! Theres new rumbling in the Glock company regarding division and removal of Glock family members because of Gaston's new wife who was his nurse when he had a heart attack or something.

Not a gun Nut? This is a case study in business

Gaston Glock is the Bill Gates of guns. This is a case study of a unique upstart.

I thought this was a good history of Glock, being previously ignorant of it (although quite familiar with firearms and pistols in general).

The only thing I didn't care for were the inclusion of political/policy issues that didn't really have much to do with Glock itself. There was some marginal connection to Glock, in places, but I felt that the author just wanted to include his opinion rather than it being a strong need for including that sort of thing to further the Glock story.

Overall I'd probably recommend the book to anyone interested in the history of Glock, or firearms in general, though if you're knowledgeable about firearms as well as the many childish attempts at gun control you might find yourself rolling your eyes a few times.

This is a good overview of the history of Glock, and I learned a lot.

The author injects periodically his own view points as facts which may mislead the ignorant, but perhaps this is just to be expected.

He does a good job outlining the NRAs operating practices, but these practices are the very reason for the NRAs decline in popularity. The modern gun community is very educated and science based in their beliefs. The gun community is beginning to hold their ‘advocates’ accountable. We also have better statistical data than in the time this book was written. Would love to hear the Authors thoughts today. I plan on contacting the Author to know just that.

Authors, Please Get It Right!

Where does Glock rank among all the audiobooks you’ve listened to so far?

Have you listened to any of Kiff VandenHeuvel’s other performances before? How does this one compare?

Sit still for 8 hours? I don't think so!

This book was filled with interesting facts and figures regarding the Glock pistol and the narration was first rate. I consider myself a gun guy and maybe I'm picking nits here, but the author occasionally uses the term "clip" interchangeably with "magazine". To call a pistol ammunition magazine a clip in this otherwise fine book is, to me, akin to watching a fine symphony performance while a guy in the corner is scratching his fingernails on a blackboard!

All you want to know about the Glock

This book was recommended by someone I follow so thought I would give it a try. I was interested because all types of books I read, from spy stories to murder mysteries,the Glock is mentioned, As I knew nothing about the Glock I thought this book would educate me, which it did. This book is well researched and gives an in-depth history of the gun. It goes into the business of gun manufacturing and sales in great detail. I found it interesting when the request went out for a new gun design the established companies looked at the requirements and said it could not be done and the outsider with no gun knowledge Gaston Glock designed a gun to meet the government requirements. A good lesson for old established companies that you have to hire new engineering blood and keep pushing the R/D departments. The book also covered the gun culture in America and a company must have something Americas want to buy as the rest of the world has less interest in guns. The book also covered the gun politics in the USA. I do hope that Smith and Westin, Colt and the other US gun manufacture get it together and design guns to compete. Kiff VanderHeuvel did a good job narrating the story.

Would be better without all the biased political views

The book is good. The audio is great. The story flows well, and is very informative. That is until the last few chapters, this is where the author clearly starts with political bias. It’s a shame.

This book had everything. Business, guns, greed, pride, money, sex, history with a great twist near the end!
listen to this book regardless if you like handguns.

The gun the changed America

Would you consider the audio edition of Glock to be better than the print version?

Glock is a book about the maker of the gun as much as the gun itself. The story goes into great detail of the genius of the American marketer and how he was treated by Goustov Glock and the politics of the time when the Glock replaced the Smith and Wesson revolver.
The gun really does shine as a unique weapon among the tried and true revolver and the other semi auto revolvers.
The author covers every issue this gun was involved in including the corporations ability to move from country to country to skirt tax laws, the NRA hard lines, the gun control lobby fear tactics, the governments weak gun laws, and the lawsuits from gun owners who accidentally shoot themselves and expect to be compensated.
I really enjoyed the research and conclusions drawn by the author who also revealed his own feelings towards gun control, safety, training and necessity.