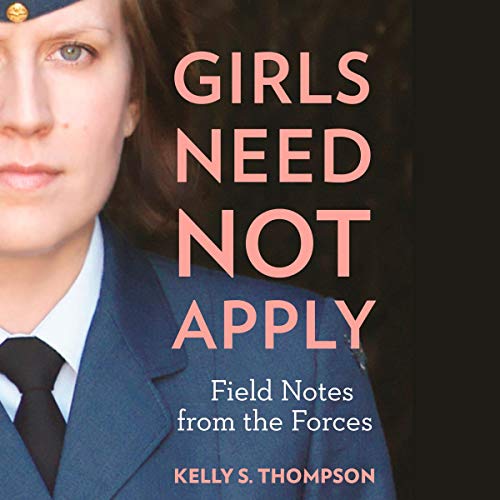 By: Kelly S. Thompson
Narrated by: Amy Rutherford
Try for $0.00

This inspiring, compelling debut memoir chronicles the experiences of a female captain serving in the Canadian Armed Forces, and her journey to make space for herself in a traditionally masculine world.

At 18 years old, Kelly Thompson enlisted in the Canadian Armed Forces. Despite growing up in a military family - she would, in fact, be a fourth-generation soldier - she couldn't shake the feeling that she didn't belong.

From the moment she arrives for basic training at a Quebec military base, a young woman more interested in writing than weaponry, she quickly realizes that her conception of what being a soldier means, forged from a desire to serve her country after the 9/11 attacks, isn't entirely accurate. A career as a female officer will involve navigating a masculinized culture and coming to grips with her burgeoning feminism.

In this compulsively listenable memoir, Thompson writes with wit and honesty about her own development as a woman and a soldier, unsparingly highlighting truths about her time in the military. In sharply crafted prose, she chronicles the frequent sexism and misogyny she encounters both in training and later in the workplace, and explores her own feelings of pride and loyalty to the Forces, and a family legacy of PTSD, all while searching for an artistic identity in a career that demands conformity. When she sustains a career-altering injury, Thompson fearlessly re-examines her identity as a soldier.

Girls Need Not Apply is a refreshingly honest story of conviction, determination, and empowerment, and a bit of a love story, too.

“In Girls Need Not Apply, Kelly S. Thompson presents us with a masterclass in resilience. With equal parts strength and vulnerability, Thompson navigates what it means to find belonging - and success - in a hyper-masculinized culture that was never built for women. A must-read for those of us who make it our daily habit to smash through age-old, sexist barriers.” (Lauren McKeon, author of F-Bomb: Dispatches from the War on Feminism)

“I couldn’t look away from this open-hearted and unflinchingly honest coming-of-age memoir until I’d turned the last page. A fierce, emotional debut by an author to watch!” (Marissa Stapley, Globe and Mail best-selling author of The Last Resort)

What listeners say about Girls Need Not Apply

I was a bit reluctant to start this book from some negative reviews, however, after reading it. I couldn’t stop until completed

Captain Thompson wrote this book as a human before an officer. She explored her insecurities, military stigmas honest and truthful. Her writing style is delightful and touching. Wonderful book.