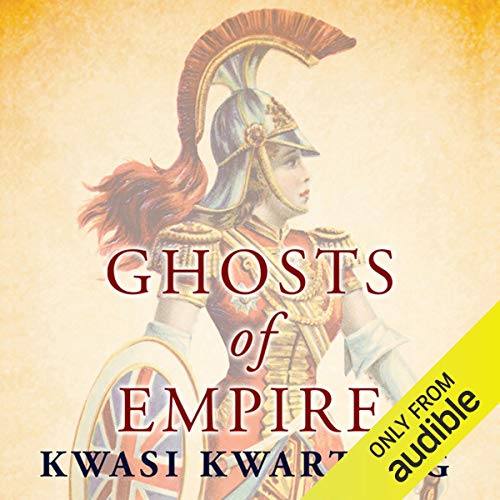 The British Empire was the creation of a tremendous outpouring of energy and opportunism, when the British were at their most self-confident, and the wealth they gathered was prodigious. At its heart lay a sense of the rectitude of the British way of life, meted out to vast swathes of the rest of the world without let or hindrance.

Yet, as this book explains, the empire was not formed by coherent policy, and its decline reflected this: its later years were characterised by a series of accidental oversights, decisions taken without due consideration for the consequences, and uncertain pragmatism. Many of the world's trouble spots are those left behind by the chaotic retreat of empire, and its ghosts continue to haunt today's international scene.

This powerful book addresses the realities of the British Empire from its inception to its demise, questioning the nature of its glory and cataloguing both the inadequacies of its ideals and the short-termism of its actions.

"I was hugely impressed by the sheer quality of his analysis and lucid writing, not least because he made the subject feel so alive, and by his systematic rebuttal of those who seek to whitewash our empire, or worse, wish to see the US adopt a modernised version of it, despite the anti-imperial spirit of that country. I learned something new on virtually every page of his fine book, a reflection of the depth and rigour of his research. His pen portraits of leading imperialists are superbly achieved. I was also constantly aware that the book is by a practicing politician, rather than an academic, and enjoyed the realism of his take on each of his chosen examples. I believe he will have a deserved success with it." (Michael Burleigh)
"Well-written, witty, but above all fair-minded, this is the best general overview of the British Empire to appear in years. Kwasi Kwarteng has emerged as a significant scholar on the historical scene." (Andrew Roberts)
"Smart, witty and personable. And he has written as provocative and personal book about the British Empire as has been published for some time...grand and colourful certainly sums up Kwarteng's approach to his subject. He is a gifted pen-portraitist. This is a book about a motley crew, and it is alive with wild and wonderful characters...an excellent and very readable new contribution to the debate. This is a cracking debut from a very accomplished historian." ( Daily Telegraph)
"Kwarteng takes an amusing and mostly well-written tour d'horizon through six former colonies." ( Independent on Sunday)
"Lucid and provocative...well researched and crisply written...a refreshing change from the flow of popular books maintaining that British imperialists were either blood-crazed villains or saintly liberals." ( Sunday Times)
"a fascinating and subtle book." ( Daily Telegraph)
"Witty and cool, it is immune to nostalgia, and in the end rather angry. That anger is to it's author's credit." ( The Economist)
"Whilst lamenting the consequences of our preference for "character" over policy, Kwarteng has produced a highly readable book, not least because of its cast of willful, perverse or semi-crazed figures who exercised power without responsibility in the build-up and downfall of empire. With his unusual background, the author knows whereof he speaks. The reaction of his political colleagues will be interesting." ( The Sunday Telegraph)

What listeners say about Ghosts of Empire

A lot of history in different contexts. I thoroughly enjoyed it. Some of it was painful to read, however I had plenty of lightbulb moments and reassurances to my own thoughts of the British empire. I would have loved to read something regarding the British empire in Southern Africa or persons like Cecil John Rhodes. I will be reading this book again and again.

Good addition to the history of empire

The structure of the book works well. Rather than give an over view of the empire it concentrates on telling the the story of British involvement in six different countries; Iraq, Kashmir Sudan, Burma, Nigeria, and Hong Kong.  This allows a better  understanding of the impact of imperial rule. The author looks to show how  decisions made by imperial officials caused instability in these states, post empire. I enjoyed these potted histories which are told well and  centre around key imperial characters.  The author wants to show how the empire was not centrally coordinated and  individuals on the ground could make momentus decisions, with far-reaching impacts.  The problem is the author largely tells the story from the British perspective.   He does not show how these decisions were reached in the context of the local situation, and that the local population were also important  actors in the drama.  A minor gripe is the author's obsession with which school and Oxbridge college the main protagonists went too.  While it is important to show the narrow social structure that imperialism was based on, this could have been dealt with in a few pages, not dragged up continually throughout the book.

A Great listen, very informative to how disorganised and elitist the colonies where under British rule.

I enjoyed listening to this rewarding book - how the British ruled under Imperialism and colonialism. This book took me by surprise on aspects that occurred during the British ruled government the British Empire regions. The narrative was given indepth information and factual events that occurred during the time of British imperialism - a class structured control. The narrative was slightly fast therefore would need to re-run some of the chapters to get a good understanding of the occurences that took place.

Excellent look at what happened next

clear, provocative - filled a huge gap in my knowledge. why don't we talk about this more?

Elliot Levey reads this important book with style and flair, with the preface feeling delivered by Kwasi Kwarteng himself, adding that special feel of the author's intent. Listening to history allows reflection of a kind not so easy when reading, and this book is of great importance: if you have a wish to understand many of the problems of political management in the old Empire, then this is the book for you. Well thought of by historians, this is a very accessible text.

Despite being well written, researched and well read, this book is strangely disappointing. Theres too much instantly forgettable detail. And not much in the way of portraiture and exploration of important characters. Nor does it give much of a picture of the imperial subjects and the wider international politics of the time. Read in a cheerful, breathless middle class voice the overall effect seems to be more of a paeon to empire than an interesting critique. Clearly this is not what the author intended, so its a bit of an own goal.