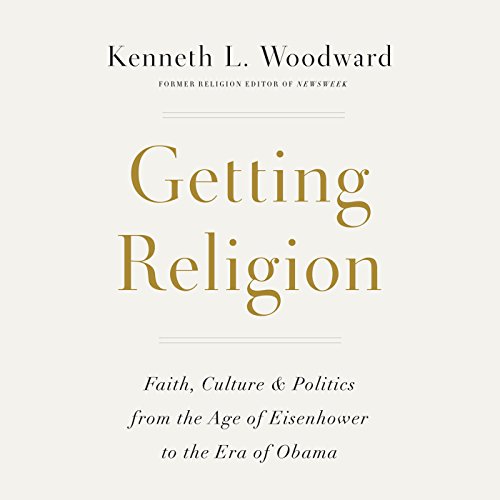 By: Kenneth L. Woodward
Narrated by: Peter Altschuler
Try for $0.00

Impeccably researched, thought challenging, and leavened by wit, Getting Religion, the highly anticipated new book from Kenneth L. Woodward, is ideal for listeners looking to understand how religion came to be a contentious element in 21st-century public life.

Here the award-winning author blends memoir (especially of the postwar era) with copious reporting and shrewd historical analysis to tell the story of how American religion, culture, and politics influenced each other in the second half of the 20th century. There are few people writing today who could tell this important story with such authority and insight. A scholar as well as one of the nation's most respected journalists, Woodward served as Newsweek's religion editor for nearly 40 years, reporting from five continents and contributing over 700 articles, including nearly 100 cover stories, on a wide range of social issues, ideas, and movements.

Beginning with a bold reassessment of the '50s, Woodward's narrative weaves through the civil rights era and the movements that followed in its wake: the anti-Vietnam movement, liberation theology in Latin America, the rise of Evangelicalism and decline of mainline Protestantism, women's liberation and the Bible, the turn to Asian spirituality, the transformation of the family and emergence of religious cults, and the embrace of righteous politics by both the Republican and Democratic Parties.

For listeners interested in how religion, economics, family life, and politics influence each other, Woodward introduces a fresh vocabulary of terms such as embedded religion, movement religion, and entrepreneurial religion to illuminate the interweaving of the secular and sacred in American public life.

This is one of those rare books that changes the way Americans think about belief, behavior, and belonging.

What listeners say about Getting Religion