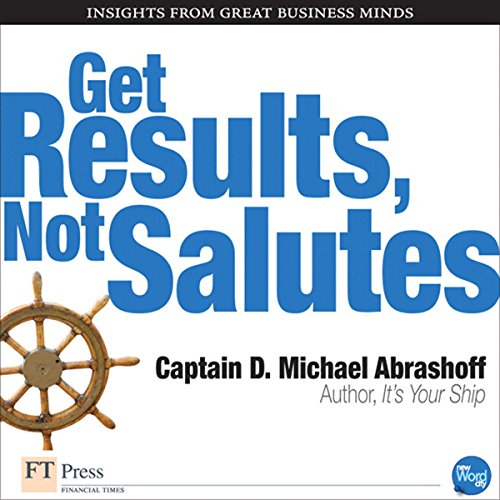 Get Results, Not Salutes

Get Results, Not Salutes

Mike Abrashoff learned about leadership as captain of the USS Benfold, a guided-missile destroyer that he and his crew transformed from a dysfunctional disgrace into the best damn ship in the U.S. Navy. He told that story in a best-selling book, It's Your Ship. Now he's distilling the lessons of that experience, plus what he's learned as a consultant and speaker, into a series of brief, practical guides to effective leadership. This is one of them, and it tells you how to cut through the nonsense to get solid results.

"Our ship, USS Benfold, was serving in the Persian Gulf in the 1997 Iraq crisis, and the entire U.S. fleet there was snagged in a giant communications snafu," he says. "At any moment, some 7,000 messages could go astray or just stop moving. Ironically, Benfold and many other ships were equipped with a new satellite system for launching Tomahawk missiles. But most radio operators hadn't been trained to use it for anything besides launching missiles. Not so John Rafalko, who pored over its manuals and told me it could solve all our communications problems. I reported this to the admiral's chief of staff for communications, who rejected the idea. With the fleet verging on chaos, I went over his head and told the admiral - who erupted, chewed out his subordinate, and ordered him to adopt Rafalko's plan immediately. We flew John all over the Gulf to train other operators, and suddenly the whole fleet was communicating seamlessly. This radioman saved the Navy's bacon: My only role was to listen and back him up."

Listen to It's Your Ship: Management Techniques from the Best Damn Ship in the Navy.
©2010 D. Michael Abrashoff (P)2009 Audible, Inc.