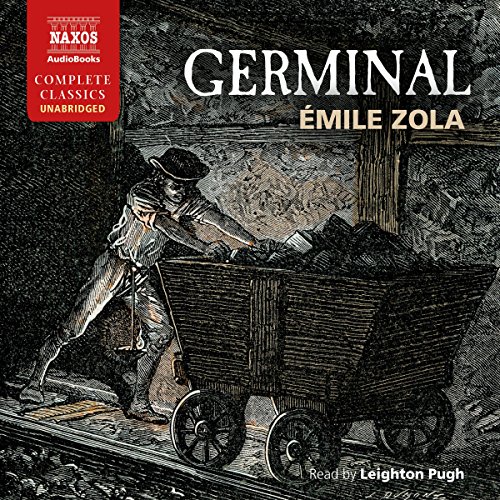 By: Émile Zola
Narrated by: Leighton Pugh
Try for $0.00

Germinal is one of the most striking novels in the French tradition. Widely regarded as Zola's masterpiece, the novel describes the working conditions of French coalminers in the 1860s in harsh and realistic terms. It is visceral, graphic, and unrelenting. Its strong socialist principles and vivid accounts of the miners' strikes meant that the novel became a key symbol in the workers' fight against oppression, with chants of "Germinal! Germinal!" resonating high above the author's funeral.

What listeners say about Germinal

Zola’s story of the conflict between labor and management still reverberates in our times. As the grandson of an immigrant driven to work in the mines at the beginning of the 20th century, the imagery really struck close to home. The plot is beautifully constructed and will hold your attention from the beginning to the dramatic end. The reading really brings the novel to life. Don’t pass this one by!

Would you listen to Germinal again? Why?

This is great novel that seems to be virtually unknown to American readers. It is both a vivid and convincing account of the everyday lives of miners, as told from within, and the tale of a heroic, doomed strike and a catastrophic mine disaster. Although it is quite long, it is beautifully written, full of complex and engaging characters, and carries the reader forward with great momentum. In this production, it is well read. Among other things, the reader handles the French names comfortably.

What other book might you compare Germinal to and why?

I can think of no 19th Century novel in English that is comparable. It delves more deeply into the texture of everyday lives of working class men and women then anything by Dickens and with fewer illusions. It treats sex, both good sex and bad sex, simply as another fact of the lives of the characters without either euphemisms (other than those used by characters themselves) or prurience. There are no artificial happy endings, but the novel is not dreary.

this is a masterful performance of Zola's utterly depressing tale of the plight of French coal miners in the Second empire. Best audiobook I've ever read.

Excellent reading of a French classic

This has been a favorite novel for many years. I have read it at least three times, and am now enjoying an excellent rendition by Leighton Pugh (as is true of most Naxos audiobooks, the production is first class). The story centers around the plight of the working class (here, coal miners) of northern France in the second half of the nineteenth century. Zola details their squalid living conditions, inadequate pay, and dangerous work. But the book is not propaganda. Although the owners tend to be selfish, smug, and lacking insight into the workers’ inescapable poverty under the capitalism of that time, Zola never demonizes them. Neither are the workers’ faults ignored. Love, violence, revenge, and sabotage all come into play. The book is probably the best-known and certainly one of the best of the 20-volume Rougon-Macquart series.

I’ve read this book over and over and it never fails to haunt. The miserable conditions of this coal mining village are fascinating in their dreadfulness and the strike to improve their lot is inspiring and heartbreaking. Zola’s attention to detail is astounding. From the first sentence to the last you are their for the journey.

Deeply moving and dramatic tale read by a phenomenal narrator

A wonderfully narrated version of Zola's intense political and personal drama about French miners, the mine owners and a growing workers' revolution.

I wish now that I listened to this book when I purchased it years ago. This book is not to be missed.

this was a beautifully written story. I finished it so quickly. The way Emile writes the characters is so observational, but so intimate as well.

It has been a long time since I enjoyed a story as much as this one.

I had to read this book for class and it is the absolute worst book I have ever read. The narration is decent and really the only reason I got through it. This book is so long and so boring and I hated every character. Just read a summary. Don't suffer through this awful book.

The 'shuddering volcano' are the coal mines of Northern France in 1860s, but the phrase applies to the whole of this blistering novel which was Zola's masterpiece published in 1885. The coal mines digest the human poor - men, women, girls and boys - slaving deep in the bowels of the earth for a wage frequently docked unjustly and barely able to support life. Desperately poor, these people strive to support their families which are constantly expanding not only by unwanted babies, but also by sick, old or crippled family members, spat out by the pits and unable to work. Meanwhile the pit-owners hold lavish dinner parties, plan their daughters' weddings and refuse to give to the destitute who beg at their doors.
When Etienne arrives in Montsou seeking work and lodges with the Maheu family, he shares the children's bed along with Catherine, a 15 year-old pit-tram pusher and their bond becomes the emotional focus of the story. The whole 19 hours' listening is a savage cry against the oppression and misery of the poor with Etienne as Zola's mouthpiece. It is his ferocity which drives the workers' strike which has such devastating results. There are episodes once listened to here which can never be forgotten: Etienne and Catherine trapped in the swirling water of the collapsed mine; the wild, incensed mob ripping the 'bleeding stump' from the body of the baker who had previously charged sexual favours from the daughters of desperate families in exchange for bread.
There is however hope. Germinal is the seventh month covering parts of March and April in the Revolutionary Calendar. It is the traditional time not just for social uprisings, but for the burgeoning of new shoots and germinating seeds which will bear fruit. These conditions will change, the volcano will erupt, new birth can follow.
Naxos is a guarantee of the very best unabridged recordings of classic literature, partly because of the all-essential choice of narrator. With Zola translator and narrator have the problem of the characters' language. Leighton Pugh is as accomplished with reading French names and expressions - not by any means a skill shared by all narrators - and in creating a rough accent for the Montsou pit workers. To have made them identifiably London, Irish, Newcastle or West Country would have interfered with credibility. As it is, they speak an unspecific Northern English which comes across as entirely authentic and believable as Montsou pit-workers.

loved it. Thank you. tragic and wonderful..well read, good accents. enjoyed being able to listen at 1.5 speed.

This is a book that takes you into a world very few of us have experience of. Despite being a colliers daughter my father never described the horrors of working beneath the ground. To him it was all about being with your mates. Zola's descriptions hold no punchers and throughout challenge our sensitivities. He makes very real the horrors of mining in the 19th century and also makes us think more deeply of the nature of society and whether change is possible.

Exceptional story of incredibly tragic but uplifting struggle for survival of the oppressed classes contrasted with the bourgeoisie. Very well read

A real potboiler but with intelligence and heart like a great silent movie. Fantastic novel!

One of the Greatest Books in the World

A profoundly moving, rich and provoking story, beautifully read by Leighton Pugh. I found his ability to portray such a multitude of characters by subtly varying his voice and accent to be awe-inspiring. I do not want to give away any plot details for fear of spoiling it for other listeners. Suffice it to say that I strongly recommend anybody interested in the human condition to purchase this title. It is life-changing.

Superb performance of a great classic

Leighton Pugh’s masterful rendering of this enduring classic of French literature is hard to imagine being bettered. The novel has it all, including suspense, horror and a subterranean love story, but most of all it contains an unforgettable portrayal of the misery of life as a miner in 1860s Second Empire France, including a tremendously told final, disastrous climax. Thrilling.