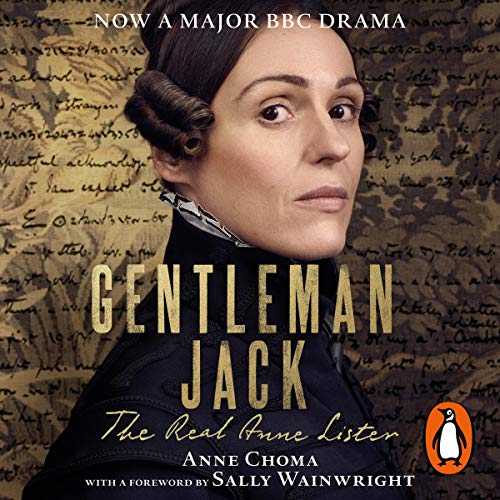 'There are more ways than one of being happy...I am living proof of this.'

Anne Lister was remarkable. Fearless, charismatic and determined to explore her lesbian sexuality, she forged her own path in a society that had no language to define her. She was a landowner, an industrialist and a prolific diarist whose output has secured her legacy as one of the most fascinating figures of the 19th century.

Gentleman Jack: The Real Anne Lister follows Anne from her crumbling ancestral home in Yorkshire to the glittering courts of Denmark as she resolves to put past heartbreak behind her and find herself a wife. This audiobook introduces the real Gentleman Jack, featuring unpublished journal extracts decrypted for the first time by series creator Sally Wainwright and writer Anne Choma.

What listeners say about Gentleman Jack

Every detail that I wondered about the reality behind this great BBC production are insightfully provided with particular quotes from Anne Lister's diaries. And above all, the period dealt with in Anne Lister's life here was not previously covered with the two volume of diaries by Helena Whitbread, previously published.

loved this book will listen again

don't hesitate to get this book, exciting, dramatic and wonderful in it's description of Anne's life

How disappointing. There is something wrong with this recording. From chapter one- it's been edited to remove breathing spaces on the performance, rushed, unnatural and unpleasant to listen to. There are also two episodes of audio scramble in the first chapter. I've had to slow it to 0.95 speed and it still sounds terrible, it is as deeply unnatural as extreme auto-tune used in music. Now the second chapter has begun and it is the same. I'll be requesting my money back. Who ever produced this has destroyed what was probably a great performance of a very good book. Please fix whatever the sound engineer has done to the recording, they've ruined it.

Certain Historians should be ashamed! Ive lived 31 years of my life not knowing this AMAZING woman existed! She was brave , Ambitious, Passionate & clearly did not belong in her time! (The 1800's) But then again maybe she was? Maybe she was created to start the evolution of the 'being true to yourself' to be a pioneer for the future of pride within all us homosexual's.
I think Miss.Anne.Lister, Should herself be awarded something special to make her name recognisable by all of the worlds population within the 21st century. I could write all day about this incredible soul! Top Audiobook, Even brought the paper back!! After reading 'The secret diaries of Miss.Anne.Lister' Im scared i will run out of trnslations of the whole diary, has it even been de-coded, start to finish?? I'd love to decode it , if it has not been , R.I.P Miss.Anne.Lister. I salute you for being yourself, Like i myself always have been . I understand the struggle & toll it takes on mental health xx

I enjoyed listening to this book and started watching the series after a few chapters in. I did wonder as the story unfolds whether Anne Lister had manipulated Anne Walker who suffered with her mental health but I still enjoyed the book and thought Anne Lister a remarkable force of nature

Good accompaniment to the tv series. It's interesting to hear the bits they left out!
complex character ; bold, fierce and alive.
intriguing from start to finish:from meeting princesses to dissecting a head!
wiuld reccomend. It was a nice touch having her excerpts from her diary read in the northern accent too.

A great companion for the TV production

Couldn't stop until it was finished. Gives a lot of context to the TV series. What a phenomenal person it's about time she gets the recognition she deserved.

My only criticism of the audio version of the book is the voice reading diary extracts. Anne Lister had a deep voice & this wasn't reflected. Felt at odds with the character it portrayed.

Better than the tv-series. Really loved it. The author has done a really good job and this boon is a true honour to Anne Lister

I thought the voice of Erin Shanagher sounded too young and feminine for Anne Lister - it has been said she had a deep voice.
Otherwise, a wonderful book

Totally loved this audio book, the narrators really brought Anne back to life, a must listen for any Anne lister fans.

A moving story of a women's struggle to live her truth. Showing great strength and conviction.

Let down by one of the narrators

I loved the series and I was really looking forward to this. The story is well written and the main narrator is excellent but, for me, the other narrator, who reads the excerpts from the diaries, lets it down. She has the wrong voice for the character of Anne Lister. I find her difficult to listen to because I can't identity with her as Anne Lister at all. I think it would have been better to have the main narrator narrate the whole audio book.

A very interesting companion to the TV series. very well narrated. one of the best I have heard.

Great companion to the TV series

Loved it. Great LGBT history for anyone interested. Highly recommend this book for anyone who enjoyed the series.

My most favourite audio book to date! It ended too soon! Ann Lister was incredible.