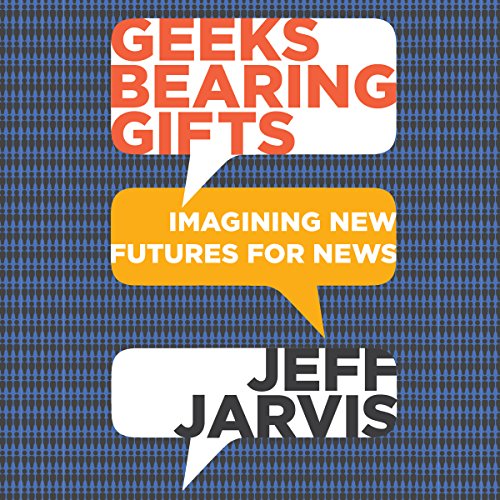 Technology has disrupted the news industry - its relationships, forms, and business models - but it also provides no end of opportunities for improving, expanding, reimagining, and sustaining journalism. Geeks Bearing Gifts: Imagining New Futures for News is a creative, thought-provoking and entertaining exploration of the possible future(s) of news by Professor Jeff Jarvis, who leads the Tow-Knight Center for Entrepreneurial Journalism at the CUNY Graduate School of Journalism.

To Jarvis, journalism helps a community better organize its knowledge so it can better organize itself: "But we in the field came to define ourselves less by our value and mission and more by our media and tools - ink on pulp or slick paper, sound or images over airwaves. Now we have new tools to exploit. Those tools require new skills and create new value. But at the core, we serve citizens and communities." He offers not a single definitive future of journalism and news, but a range of possibilities depending on how journalists and journalism evolve - with the help of the "geeks" whose advances in media technology offer many opportunities for journalists and media entrepreneurs who are willing to think creatively and take risks.

Jarvis, one of the preeminent voices on emerging forms of journalism, news delivery, and community engagement, advises many media companies, startups, and foundations. He is a former president and creative director of Advance.net, the online arm of Advance Publications, and was the creator and founding editor of Entertainment Weekly; Sunday editor and associate publisher of the New York Daily News; TV critic for TV Guide and People; a columnist on the San Francisco Examiner; and assistant city editor and reporter for the Chicago Tribune.

Like the ideas he has in the book. I would like to see them come true. I didn't really get to it the book because I don't really pay attention to thing in journalism.