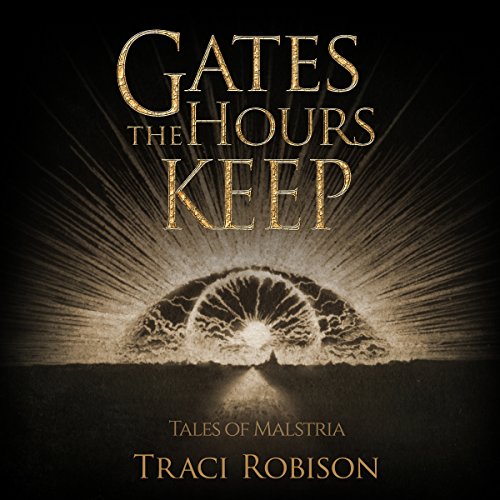 By: Traci Robison
Narrated by: Mark Deakins
Free with a 30-day trial

As an apprentice priest to the god Aplu, Leures Vethna learns to read omens. The moment he sees Diomedes of Thebes, Leures knows the Greek mercenary will take him from his Etruscan homeland to a greater destiny. Fate leads them to the farthermost regions of the known world, where he and Diomedes will fight as mercenaries against Alexander the Great's army. But, no matter how far he travels, Leures can't escape the curse he's carried from his youth. Death dogs his heels. Broken in battle and dwelling in a camp where men are dying nightly, he's overcome by darkness until a strange willful woman resurrects him. When Diomedes senses she is not what she seems, Leures must choose between his beloved friend and the woman he dreams holds his future.

What listeners say about Gates the Hours Keep

The wayward son of an Etruscan King, Leures Vethna escapes slavery in the mines and prays to a dark God for vengeance against the father that sent him there. Escaping his homeland with a Greek mercenaries, Leures finds himself entangled in a war against Alexander the Great. Broken by battle, Leures' spirits are resurrected by a exotic woman who's not all she seems. If you like dark historical fiction, you'll love Gates The Hours Keep. Wonderfully written, this page turner has been richly researched and could have been pulled straight off an ancient clay tablet.