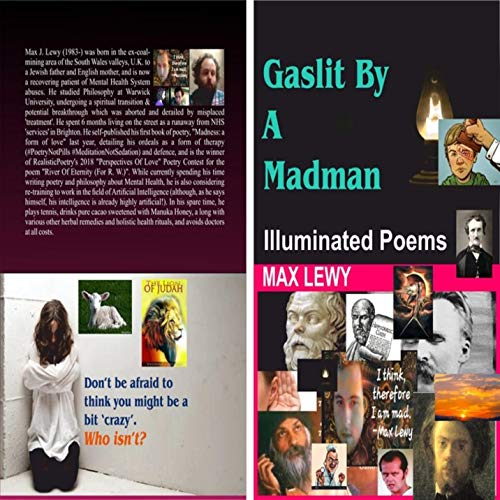 Gaslit by a Madman

Gaslit by a Madman or The Certifiably True Ravings of a Sectioned Philosopher is a droller take on the subjects of mental health, political issues, and Nietzschean, Christian, Jungian, existentialist, and post-modern philosophy. Don’t be afraid to question your world view; don’t be afraid to think you might be a bit "mad". Who isn’t?

It is based on the author Max J. Lewy’s own experience as an oh-so-patient patient in the NHS mental health system. Veritably knocked off his horse by two out-of-control, gaslighting shrinks at the tender age of 23, his writings trace his recovery from this life-changing, iatrogenic incident over the next 12 or so years, exploring the "mad" identity that was placed upon him and the truly insane, or certainly very flawed and eyebrow-raising system which so unfortunately often does such things to quite healthy and relatively rational people.

This companion volume, released on his 36th (that's six times six) birthday as a little gift (for "The Beast", presumably...but who knows, maybe Lucifer, maybe Jesus, maybe the old bearded madman at the end of the street with a "The Apocalypse Is Nigh" cardboard sign hung to the back of his bike), contains 36 beautifully illuminated poems, in the manner of William Blake, only with modern-day collaged images from around the world wide web.

What listeners say about Gaslit by a Madman