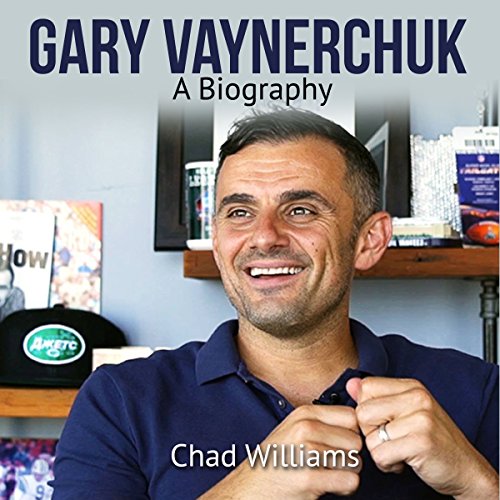 By: Chad Williams
Narrated by: Jimmy Kieffer
Try for $0.00

Gary Vaynerchuk is an American entrepreneur, four-time New York Times best-selling author, speaker, and Internet personality. First known as a leading wine critic who grew his family's wine business from $3 million to $60 million, Vaynerchuk is best known as a digital marketing and social-media pioneer at the helm of New York-based VaynerMedia and VaynerX. Vaynerchuk has made a number of personal investments as an angel investor including Facebook, Uber, Twitter, Venmo, and dozens of other startups. In 2017, Entrepreneur magazine put Vaynerchuk's net worth at $160 million.

What listeners say about Gary Vaynerchuk: A Biography

Interesting story but not complete

His approach to building a business could be worthwhile if we had more details.

If you’ve listened to books by Chad Williams before, how does this one compare?

Have you listened to any of Jimmy Kieffer’s other performances before? How does this one compare?

Could you see Gary Vaynerchuk: A Biography being made into a movie or a TV series? Who should the stars be?

When the odds are stacked against you hard work and determination will take you everywhere in life. Growing a $3 million dollar wine business to a $60 million dollar business is quite an accomplishment. Even with all the challenges Gary was faced with, defeat was never an option. I enjoyed everything about this well narrated book. I was given this review copy and have decided to voluntarily leave this review.

If you were waiting for an introduction, here it is.

I had never heard of this dude before, but I am interested in biography in general. I was intrigued by his story. If you want a little bit of background on him before at after diving intone of his best sellers, here is a convenient entry point.

The content was well researched and organized in a way that made sense.

The narrator did a great job too.

*interesting book but I was not even sure

*interesting book but I was not even sure who this is. If this was supposed to be just the introduction to the book it would make more sense to me. It was well written and the narrator was okay not great.

This is a very short, high level look at entrepreneur, Gary Vaynerchuk. As someone who was not familiar with who he is, I found this quite interesting.

This was much more like a magazine article than a book. Very short not a lot of substance. I thought Jimmy Kieffer did a nice job of narrator. I was gifted this audiobook with the understanding I would leave an honest review.

Unless you have a personal interest in hearing abrief overview of the life of Gary Vaynerchuk or his business/investment dealings, this book offers little else. The narration is clear and steady, but the audio has a somewhat "sterile" sound to it. In short, there was nothing about this story that really struck me as to being extraordinary as, perhaps, from the fact Gary's family emigrated from behind the Iron Curtain; that I hadn't known. Basically, an average listen right across the board. A review copy of this audiobook was provided by the author, narrator, or publisher at no cost in return for this unbiased review. If you found this review helpful, please take a moment to click yes below.